How to Train Your Dragon Wiki
Register
Don't have an account?
Sign In
Advertisement
in: Dragons, Dragon Hybrids and Subspecies, Mystery Class,
and 5 more

The Zipplewraith is a large hybrid between a Hideous Zippleback and a Snow Wraith that first appeared in the game Dragons: Titan Uprising.

The body of a Zipplewraith is similar to that of the Snow Wraith parent, but sporting the two heads and two tails of the Hideous Zippleback. It has thick and curved nasal horns and two long, but straight horns at the back of its heads. The Zipplewraith has the eyebrow-like appendages of the Snow Wraith both of its heads, alongside long ledges under its chins. Two rows of round lobes start on its necks and continue down the dragon's back, which transform into small spines on its double tail. The Zipplewraith's wings are long, but relatively small, and are covered in dark-coloured spots, similar to a Zippleback.

Titan Wing Zipplewraiths are much bigger than the adults, and have considerably longer necks. They have bigger and sharper horns and spines, while their round lobes become triangular. Their face appendages grow longer, and their colours become slightly brighter.

Just like its Zippleback parent, the Zipplewraith is capable of producing flammable gas from one head that can be ignited with a spark produced by the other head. In addition to that, the Zipplewraith can also shoot small concentrated blasts of blue plasma, similar to those of a Snow Wraith.

Inherited from the Snow Wraith, the Zipplewraith can survive in sub-zero temperatures, making it suited for the arctic habitats it lives in. Some individuals, like Snowback, have such a cold skin, that merely touching a warm-blooded human can lead to hypothermia in seconds, and to frostbite in minutes.

Much like the Zippleback, the Zipplewraith becomes vulnerable if the two heads don't get along. The tension between the heads is amplified by the solitary behavior of the Zipplewraith, making it impossible for one head to ever be fully alone. This can sometimes lead to the two heads fighting each other over small things like which head gets to eat.

Zipplewraiths have inherited both personalities of their parent species. They are solitary dragons that can barely stand the presence of each other, which is why they live in arctic regions, where it is too cold for humans or other dragons to live. However, if they do care about anyone else, they will stop at nothing to protect them. Zipplewraiths have very good memories, with some individuals, like Skadi's Woe, having the longest memories of any dragons.

Training a Zipplewraith is extremely difficult, but not impossible. It requires a great amount of patience from the trainer to befriend both heads and make them work together. Saving a Zipplewraith's life can crate a life-long bond, as the dragon will do anything to defend its rider.

The Zipplewraith was first introduced in this game, along with many other dragon hybrids. The only way a player can obtain a Zipplewraith is by breeding a Hideous Zippleback and a Snow Wraith in the Breedery. 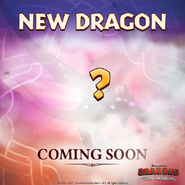 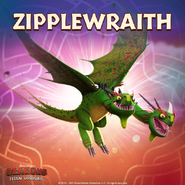