How to Train Your Dragon Wiki
Register
Don't have an account?
Sign In
Advertisement
in: School of Dragons, Locations, Franchise Locations,
and 2 more

Zippleback Island is a marshy island. Mountains rise to form a rough ring at the edges of the island with a lake in the island center. The rocks are higher on one edge than the other. There are cliff areas and beach areas.

The game soundtrack for Zippleback Island contains the sounds of birds. The sparse trees on the island are leafless, but have hanging green vines from their branches. The environment is similar to a swamp or mire.

In the expansion, "Battle for the Edge", early on there is a quest to meet Ruffnut and Tuffnut at Zippleback Island to free a trapped Zippleback. The player also finds a Snaptrapper in a swallow burrow, and learn that the Snaptrapper is camouflaging itself to hunt a spider. 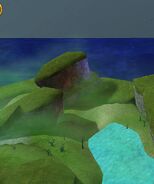 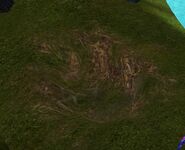