Zach Callison is an actor who voices the dragon Winger in Dragons: Rescue Riders.

Zach Callison was born in St. Louis, Missouri as the youngest of three children. He showed interest in the performing arts as early as seven years of age. He has board talent in theater acting, voice acting, singing, playing the piano, and writing. He is also bi-lingual: English and Italian.

Zach Callison has won numerous rewards. These include Young Artist Awards in 2013 and 2014, a BTVA Voice Acting Award in 2014 through 2015, and a Young Entertainer Award in 2016 for Best Young Actor Voice Over Role 13-21 for his role as Steven Universe. 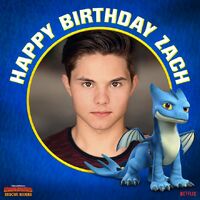