Yawnckle is a Gronckle introduced in the game, Dragons: Rise of Berk.

Yawnckle is a typical appearing Gronckle with a color base of bright green. His under belly is a dusty rose color. Yawnkle's wing membranes are a rich yellow with orange edging. His larger skin nobs are white with yellow speckles. He has blue eyes.

According to the Dragons: Rise of Berk official description, Yawnckle is seen as a very lazy Gronckle, more so than typical Gronckles. This may mean he naps most of the time. He also loves sniffing flowers, most likely enjoying a nice spring day. However, Yawnckle also has allergies - possibly to pollen - causing him to sneeze lava inadvertently.

Yawnckle was an exclusive dragon available after finding all the flowers in the "Spring Flower Hunt" in May of 2017. He is still available in the Book of Dragons. 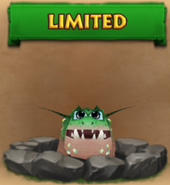 Retrieved from "https://howtotrainyourdragon.fandom.com/wiki/Yawnckle?oldid=535945"
Community content is available under CC-BY-SA unless otherwise noted.