Yaknog is a drink first seen prepared by Astrid in Gift of the Night Fury during the festival of Snoggletog. It is a thick, slimy, white and yellowish colored drink and it is shown to have a very horrible taste.

In Gift of the Night Fury, after the dragon's sudden departure, all the Vikings are very depressed, especially Hiccup and the gang. Astrid however, tries her best to keep up the Snoggletog cheer. So the next morning, she comes up with a new drink she prepared herself that she calls as 'Yaknog', which she hopes to become a new Snoggletog tradition. Snotlout, trying to get on her good side, decides to try some, but silently regrets it, especially since he had to swallow it instead of spitting it out in front of Astrid. Fishlegs is at first eager to try it, but awkwardly declines after Snotlout shakes his head behind Astrid's back. The twins refuse based on the smell alone, so she decides to go to Hiccup.

Astrid finds him in the smithy and she offers him the Yaknog. Hiccup is seen building a new tail for Toothless. Hiccup takes a sip of the drink, and stops immediately, not being able to bare the taste. He couldn't spit it out in front of Astrid, afraid that she might feel hurt, so he impatiently waits for her to leave and spits it out immediately. Clearly, it's shown that the Yaknog tastes horrible.

It has a final appearance in How to Train Your Dragon: Homecoming, where it has become a Snoggletog tradition to take shots of Yaknog and try not to spit it out. These are referred to as "Yakonog Shooters".

It makes an appearance in How to Train Your Dragon: Snoggletog Log, where Astrid still makes it and Hiccup, Zephyr, and Nuffink hate it. The kids even hide from Astrid so she can't give them Yaknog.

In School of Dragons, Astrid asks the player to help her make yaknog for the teens. 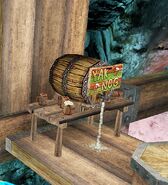 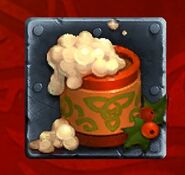 Seasonal Item for Collections in Dragons: Rise of Berk 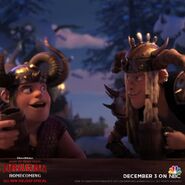 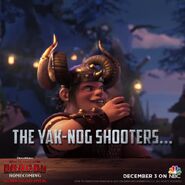 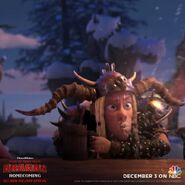 Retrieved from "https://howtotrainyourdragon.fandom.com/wiki/Yaknog?oldid=588536"
Community content is available under CC-BY-SA unless otherwise noted.