How to Train Your Dragon Wiki
Register
Don't have an account?
Sign In
Advertisement
in: Dragons: Rise of Berk, Dragons, Characters,
and 6 more

Wyrmafrost is a Groncicle that appears in the game, Dragons: Rise of Berk.

Wyrmafrost is dark brown with a shade of blue on its underbelly. Its back and wings are covered in white scales, resembling fresh fallen snow. It has white spikes and claws and bright orange eyes. 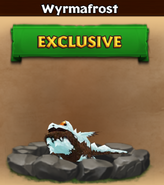