Wreck Reef is a location introduced in Wild Skies and Dragons: Rise of Berk.

Wreck Reef appears to snow rather heavily. It is a rather coastal island, with numerous sea stacks and formations surrounding the island and several hills and cliffs on the island itself. It also features a crystal clear lagoon with abundant crabs in it. Apart from several pine trees dotting the surface, the area is rather sparse in terms of vegetation. There is said to be many reefs underneath the water's surface, causing ships to wreck. In the Wild Skies maps, it is shown as a series of jagged cliff edges facing each other with the sea running between them, though the Race to the Edge map simply shows it as a rather small island.

Under the name of Wrecker's Reef, this location first debuted in this game. The player can search for the Thunderdrum and crabs.

Wreck Reef appeared on this online map of the Barbaric Archipelago. However, no additional details were given about it on the map, nor did it appear in the Dragons: Race to the Edge series. 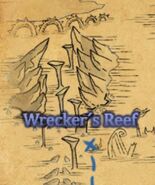 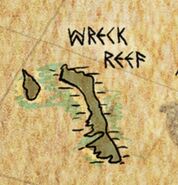 Race to the Edge map
Add a photo to this gallery

Retrieved from "https://howtotrainyourdragon.fandom.com/wiki/Wreck_Reef?oldid=388362"
Community content is available under CC-BY-SA unless otherwise noted.