Wolflegs appeared in the Game, How to Train Your Dragon for the Nintendo DS, 360, and Wii.

About a year after the defeat of the Red Death, Chief Stoick sets up a tournament to showcase dragon training. Part of the preparation for the Tournament is for the contenders to go into Berk's Forest and bring back a Shield from the Shield Tree. Many of the teenagers of the village are bickering and fighting.

In the game, School of Dragons, Wolflegs is mentioned in the Quest, "Meet the Hairy Hooligan Clans". The player is asked to visit each of the Dragon Riders and find out a little bit about their clans, or familial House.

Note that Wolflegs knocking down Piglegs may be an allusion to the nursery story, The Three Little Pigs. 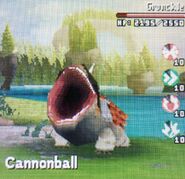