How to Train Your Dragon Wiki
Register
Don't have an account?
Sign In
Advertisement
in: Dragons, Dragon Species from the Books, Feared Dragons,
and 7 more

The Woden's Nightmare is a large Sea Dragon first mentioned in The Incomplete Book of Dragons.

Not much is known about Woden's Nightmares since they live in the open ocean, and only travel to shallower seas for something important. As with many Sea Dragons, Woden's Nightmares are huge - only somewhat smaller than a Seadragonus Giganticus Maximus. One unusual feature is that they can have as many as thirty tongues. Each tongue is capable of perceiving a different taste. Most images of the Woden's Nightmares also show a jumbled collection of multiple eyes.

Despite their size, Woden's Nightmares are able to swim very fast. Like many dragons, their blood is acidic and have very sharp claws. They can shoot lightning in addition to the more traditional fire. They can also produce toxic gases, though it is unknown by which route. Woden's Nightmares have an acute sense of smell. They are capable of speaking Dragonese.

Woden's Nightmares are described as having multiple eyes, that shoot lasers. There are very few multi-eyed dragon species seen in the books, such as Tongue-twisters and Bullguard Slavedragons.

Another ability of Woden's Nightmares is revealed in How to Fight a Dragon's Fury. They can spew out a black substance that coats the surface of water, which is also flammable, sounding very much like an oil slick.

Woden's Nightmares appear to fight against the humans during the Dragon Rebellion.

Woden's Nightmares are detailed in this reference book. 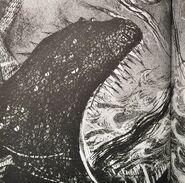