How to Train Your Dragon Wiki
Register
Don't have an account?
Sign In
Advertisement
in: School of Dragons, Locations, Franchise Locations,
and 3 more

The Whispering Death Caves represent an underground series of tunnels and caves, located underneath the Isle of Berk. They were created by Whispering Deaths tunneling through the island.

In "Worst in Show", Alvin, Mildew and Savage attempt to spy on the Dragon Riders using the tunnels and even manage to capture Meatlug.

The Whispering Death Tunnels appear in this game and are only accessible through a hole on Berk. There are several quests asking the player to go inside the tunnels, one of which includes the discovery of a Boneknapper Family. 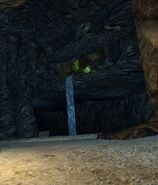