"How to Pick Your Dragon"

Whirlwing is a male Thunderdrum who first appeared in "How to Pick Your Dragon".

Before the events of "How to Pick Your Dragon", Whirlwing was attacked by some unknown enemy, resulting in him receiving a severe injury to his right wing that prevented him from flying or hunting for his own food. Fortunately, while Whirlwing was resting a cave in order to let his injury heal, another Thunderdrum, later named Thornado, assisted him by protecting Whirlwing and catching fish to feed to him. However, after attempting to raid Bucket and Mulch's fishing boat, Thornado was captured by Stoick and Hiccup, with Stoick choosing Thornado as his future dragon. However, Thornado, knowing that Whirlwing was in danger without him, managed to escape from the Berk Dragon Training Academy, with Stoick, Hiccup, and Toothless following him. They soon discovered Whirlwing hiding in the cave, allowing them to finally learn why Thornado was taking the Berkians' fish.

However, a herd of wild boars soon arrived, smelling the blood from Whirlwing's injury and closing in to attack him. Fortunately, once Stoick removed Thornado's muzzle, thus gaining Thornado's trust, the two were able to work together to fend off the boars and save Whirlwing. Soon after, the rest of the Dragon Riders arrived after being summoned by Hiccup, but they found that Stoick and Thornado had already successfully protected Whirlwing. With the approval of Thornado, Hiccup and Stoick brought Whirlwing to Gobber's shop on Berk in order to repair his injured wing, where he received a cast that was permanently placed around the Thunderdrum's wing, enabling him to fly once again.

After his injury, Whirlwing was a fearful dragon, attempting to retreat farther into his cave after the arrival of Stoick, Hiccup, and Toothless and the appearance of the attacking wild boars. However, after Stoick and Thornado rescued him from the boars, he appears to have developed a trust in Vikings, as he allowed Hiccup and Stoick to take him to Berk and he allowed Gobber to fix up his wings without protest.

Whirlwing is a light purple Thunderdrum with small white dots on its back and wings. Whirlwing's wing has large holes in it from when a wild boar attacked. As a result, he now wears a dark brown cast around his wings permanently to help him fly.

Whirlwing is introduced in the episode, "How to Pick Your Dragon".

Whirlwing is a Unique Thunderdrum available through special searches and events. 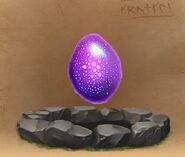 In "Dragons: Rise of Berk" 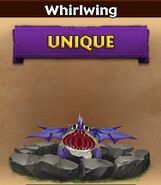 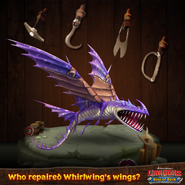 Retrieved from "https://howtotrainyourdragon.fandom.com/wiki/Whirlwing?oldid=535973"
Community content is available under CC-BY-SA unless otherwise noted.