How to Train Your Dragon Wiki
Register
Don't have an account?
Sign In
in: Animals, School of Dragons, Dragons: Race to the Edge,
and 3 more

For specific information about Narwhals, please visit the Narwhal page.

Whales are marine mammals grouped under the term Cetaceans along with dolphins and porpoises. Currently there is not a specific taxonomic group including all species that are generally referred to as whales.

Whales are generally the larger species of cetaceans, whereas dolphins are porpoises are much smaller. Whale species are divided into two groups: baleen whales and toothed whales. Toothed whales are as named - they have teeth. Baleen whales on the other hand have plates of fine keratin hairs, used for straining water to obtain their food - tiny and microscopic invertebrates.

Whales are only mentioned in the Franchise, and serve no function.

In reality, however, Vikings and many other cultures both historic and current, hunt whales for a variety of products they provide. Whale meat and blubber is eaten. Their oil was historically highly prized for its use to light lamps. Baleen and bones were used to make a variety of tools. Historical Vikings readily made use of whales and other cetaceans that were beached or close to shore, but so far there is no evidence Vikings partook of whaling in open seas, which occurred in later centuries.

In the final episode of this season, "Defenders of the Wing, Part 1", a whale is seen drawn on a map that Viggo Grimborn gives to Hiccup, in the sea near Caldera Cay.

Hiccup reminisces the time when there were "preposterously huge sea dragons" that were twenty times bigger than the blue whale.

Whales are mentioned in the player Quest "Scauldron Safari". Fishlegs compares the behavior of a group of Scauldrons to that of a group of whales, called a "pod".

In the Stable Quests there are logs which tell the player what dragons do during the mission. One option is "Flying just above a pod of orcas, their black and white skin glistening in the sun ..." Another is simply "Flying above a pod of whales ..."

One Stable Quest, called "Beached", asks for a healing dragon to help save a beached whale. 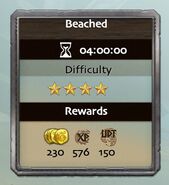