Watermelons are plants that appear minimally in the DreamWorks Dragons Franchise.

The watermelon (Citrullus lanatus) is plant from the Family Curcubitaceae, more commonly known as the Gourd Family. It is an annual trailing vine originating from Africa which later spread in other parts of the world.

It is known for its large fruit of the same name, which is actually an edible modified berry (called pepo) with a hard green rind and no internal division. Its flesh is usually red but can also be pink. It has multiple black seeds.

It is presumed that watermelons are cultivated for food, like in real life.

In the episode "Edge of Disaster, Part 1", Snotlout mentions watermelons.

Even though watermelons are not currently a harvestable plant, some appear in the background of the island School of Dragons.

Pictures of watermelons appear in Loki's Maze of Cheers during a labyrinth part.

The Melonquarry is a unique Catastrophic Quaken available in the game, and looks like a watermelon with a head, wings, and spikes. Its egg especially is intended to look like a delicious round watermelon. 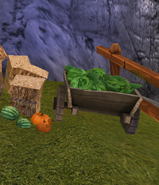 Retrieved from "https://howtotrainyourdragon.fandom.com/wiki/Watermelon_(Franchise)?oldid=397201"
Community content is available under CC-BY-SA unless otherwise noted.