How to Train Your Dragon Wiki
Register
Don't have an account?
Sign In
Advertisement
in: Plants, Dragons: Rise of Berk

Water Lily is a plant that appears minimally in the DreamWorks Dragons Franchise.

Water Lily (Nymphaeaceae) is a family of flowering plants native to tropical regions around the globe, containing over 70 different species. The plants have an aquatic lifestyle, with the roots growing in the soil beneath bodies of water and the leaves and flowers floating on the surface of the water. Water Lilies usually have wind or self-pollination, but there are a few species which have beetle pollination. Perennial Water Lilies lose their leaves during the winter and stay completely underwater during the season. They only surface new leaves during spring.

In the franchise, Water Lilies have no function, other than as decoration.

In reality, Water Lilies can also be used in medicine, specifically the flower and the rhizomes. Some species, such as Nelumbo pentapetala are edible and classified as vegetables.

During the Valentine season of 2020, seasonal decorations were added to the game, including Aegir's Drop, a small pond of water with Water Lilies on top of it. It can be purchased for 250 Freya's Flowers. 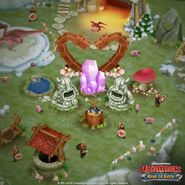