Wasps are any number of species belonging to the Order Hymenoptera and Suborder Apocrita, along with ants and bees. Specifically, they are any member of Hymenoptera that is not a bee or ant, as wasps occur in many Families and Genuses that might otherwise be shared with ants or wasps.

Hornets are referenced in the name of the Deathgripper Grim Hornettle, likely referring to the dragon's color and painful sting. 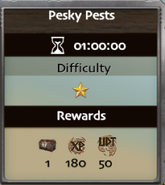 Retrieved from "https://howtotrainyourdragon.fandom.com/wiki/Wasp?oldid=519655"
Community content is available under CC-BY-SA unless otherwise noted.