Warywing is a Thornridge that appears in the game Dragons: Rise of Berk.

Warywing is magenta with a yellow underbelly. He has a light blue stripe that goes from his head to his tail along the spines on his back, which are also blue. He has four large blue spots on his face. He has yellow horns and wings, as well as eyes. Warywing has a very long neck and large head relative to the rest of his body. His head features two horns at the front (one beside each eye) and a frill with four horns. At the tip of his tail, there are two short spikes, which are mostly purple in color. 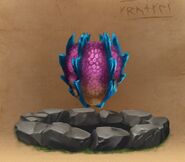 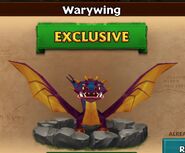 Retrieved from "https://howtotrainyourdragon.fandom.com/wiki/Warywing?oldid=433283"
Community content is available under CC-BY-SA unless otherwise noted.