How to Train Your Dragon Wiki
Register
Don't have an account?
Sign In
in: Characters, Humans, Human Characters from the Franchise,
and 7 more

Wartlout appeared in the Game, How to Train Your Dragon for the Nintendo DS, 360, and Wii.

About a year after the defeat of the Red Death, Chief Stoick sets up a tournament to showcase dragon training. Part of the preparation for the Tournament is for the contenders to go into Berk's Forest and bring back a Banner from the Forest. Many of the teenagers of the village are bickering and fighting.

Astrid or Hiccup (depending on which character the player chooses to use) arrives at the location of the Banners. Wartlout indicates the Thorston clan has taken all the banners, and the other contenders plan on playing "King of the Hill" to see who gets to keep them all. Hiccup or Astrid think each person should just take one flag as is fair, but Wartlout wants to fight over it, riding his unnamed Deadly Nadder.

In the game, School of Dragons, Scablout is mentioned in the Quest, "Meet the Hairy Hooligan Clans". The player is asked to visit each of the Dragon Riders and find out a little bit about their clans, or familial House. 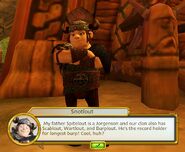