How to Train Your Dragon Wiki
Register
Don't have an account?
Sign In
Advertisement
in: Characters, Humans, Human Characters from the Books,
and 14 more

Wartihog is a Viking novice of the Hairy Hooligan Tribe and is introduced in How to Train Your Dragon.

Getting a Hunting Dragon

During the first part of the Dragon Initiation Program at the Wild Dragon Cliff, Gobber the Belch explains to the Viking novices about obtaining a dragon. He singles out Wartihog due to his size to explain that a large number of small dragons can strip him to the bone.

Wartihog is able to snag a Gronckle from the Dragon Nursery.

As the novices select their dragons, Fishlegs awakens the whole cavern of sleeping dragons. The boys flee out of the cave with the dragons in pursuit. Gobber and the novices race up Madman's Gully. The dragons catch up to him and one attacks Wartihog, "ripping red lines into his arms". Gobber defends him by beating the dragon with his axe handle.

Wartihog, along with all the other initiates of the Hairy Hooligan Tribe and Meathead Tribe were exiled for failing the Final Initiation Test on Thor'sday Thursday. A violent storm washes several Seadragonus Giganticus Maximus ashore on the Isle of Berk. He vomits from the stench of the napping Green Death. Wartihog and the other initiates carry out a plan Hiccup concocted to pit the Green Death against the Purple Death by dropping feather bombs on the dragons and hurling insults at them. Ultimately, the two dragons kill each other, but not before the Green Death seeks revenge on Hiccup.

Wartihog is listed as a student in the Pirate Training Program in How to Be a Pirate, meaning he participates in lessons such as 'Swordfighting at Sea (Beginners Only)'.

Later, while on a quest on the Isle of the Skullions to find Grimbeard the Ghastly's treasure, Wartihog and Clueless have a discussion about which dragon would win in a fight - the Bloody Crocoraptor or the Skullion? Upon seeing a huge footprint in the dirt later on, Fishlegs determines that the Skullion would win.

Wartihog takes part in a 'Frightening Foreigners' lesson in the Great Hall.

Hiccup incorrectly starts speaking French and Wartihog responds by bashing him. Still posing as a Gaulish farmer, Snotlout grapples Wartihog in a 'Baggybum Bearhug' and takes his belongings and clothes.

Later in the same lesson, Hiccup and Fishlegs are kidnapped by Romans posing as Bog-Burglars. They had a note over to Wartihog to deliver to Stoick.

As part of the young Vikings' education, Wartihog and the other Hooligan boys gathered on Huge Hill for a 'Herding-Reindeer-on-Horseback' lesson on an extremely hot day. During this lesson, the boys ride their pre-selected Riding Dragons for the first time. Wartihog's is a Marsh Tiger. The lessons turn deadly when the Reindeer and students are surrounded by flames caused by deadly Exterminator dragons. Most of the young Riding Dragons flee, leaving the boys in the fire. Gobber's Riding Dragon Goliath slowly evacuates the students two-by-two, and Wartihog escapes with Snotlout.

Wartihog is a stocky, adolescent boy of the Hooligan Tribe. He sports dark hair with two pig-tails or braids sticking out to the sides from under his helmet. His helmet has two thick, curved horns on it. Wartihog suffers from acne.

Smashing things with ease is a positive skill amongst the Hooligans and Vikings of the Barbaric Archipelago in general.

According to Book 1, Wartihog can't read. In Hooligan Viking society, this is actually considered a positive trait, though.

Wartihog is also mentioned to have a weak stomach and can vomit easily from strong smells. 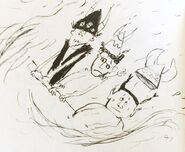 In The Incomplete Book of Dragons