Vorg is a Captain of Dagur's armada, named in the Dragons: Defenders of Berk episode "A View to a Skrill, Part 1". He is voiced by Brook Chalmers.

Vorg and his men then found a Frozen Skrill in a iceberg in "A View to a Skrill, Part 1". They then attacked Bucket and Mulch when the fishermen found the dragon. However, Vorg and his men were forced to leave the Skrill and retreat when Hiccup and his Dragon Riders arrived. Vorg was then chastised by Dagur the Deranged for failing to get the Skrill, but was forgiven. Vorg accompanied Dagur and their ships to try and capture the Skrill from Hiccup and his riders. Vorg states that he is an excellent swimmer, which may have let to the fact that he was constantly pushed overboard by Dagur. Dagur also relieves Vorg of his duty, but he still appears in subsequent episodes.

Ultimately, the Outcasts ended up with the Skrill. Vorg, Dagur and the rest of the Berserkers went to Outcast Island to make treaty with Alvin the Treacherous for the Skrill in "A View to a Skrill, Part 2". However, they betrayed Alvin, took the Skrill, and took over the Outcast tribe. Unfortunately for them, the Skrill was lost.

Later in "Smoke Gets in Your Eyes", Vorg went with Dagur, Savage and their fleets to Berk after they had Trader Johann inadvertently brought Smothering Smokebreaths with him. However, their plan backfired when Hiccup and the other riders brought the Smokebreaths to their ships. Vorg, the other berserkers, and their ships were then attacked by the Smokebreaths and were left adrift in the ocean.

In "Team Astrid", Dagur is still trying to best Hiccup and Toothless years later. Captain Vorg is also still serving Dagur. After they are able to pinpoint the location of Dragon's Edge, Dagur and his group of men attack. However, they are stymied with the arrival of additional Dragons Riders - Astrid's Auxiliary Team.

In "The Zippleback Experience, Captain Vorg and another Berserker were sent by Dagur to kidnap Hiccup. Even though they succeeded, their victory was short lived. Barf and Belch came to save Hiccup and warn the other riders, forcing Dagur, Ryker and their men to retreat. 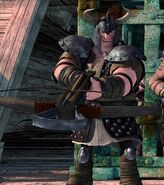