The Violet Death is a Green Death[1] living on Dragon Island. It first appeared in the game, Dragons: Titan Uprising.

Poisoned by the Dragonroot Company

In an effort to take over the lucrative trade in dragons, the Dragonroot Company poisons several alpha species around the Barbaric Archipelago with a Dragon Root mixture, including the Violet Death. The Dragon Riders and Berk pose a large impediment to their business, and making Violet Death go wild and crazed helps divert their attentions. A new dragon trainer recruit (the player) faces the angered Violet Death with a team of dragons they are training, and eventually subdues it.

The Violet Death is a Titan Wing[2] that looks very similar to other Green Deaths and the related Red Death. It is an immense dragon, almost the size of a mountain. It has six eyes, three on each side of its head, and a short thick nasal horn. The Violet Death has a large crown of spikes at the back of its head which has a coral-like shape. It has small dark deep red spikes peppered over its grey-purple hide, as well as a red belly. The Violet Death has large wings, compared to its body and a long tail which ends in a grey oblong club.

Firepower: The Violet Death is able to shoot yellow-red fire, either as small blasts or as long, powerful streams.

Lava-proof Skin: Due to living in active volcanoes, the Violet Death has lava-proof skin, which protects the dragon from the huge amounts of heat coming from the underground. 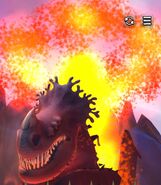 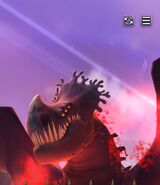 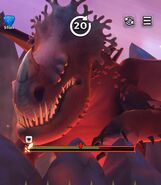 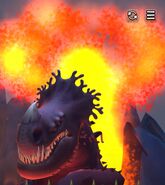 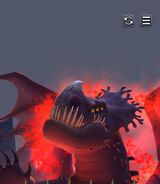 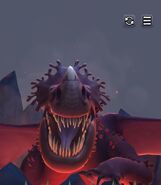 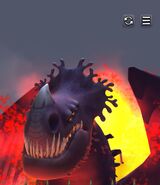 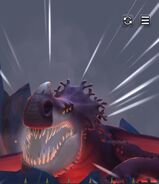 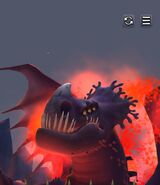 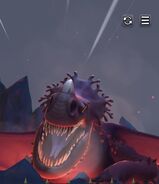 Retrieved from "https://howtotrainyourdragon.fandom.com/wiki/Violet_Death?oldid=433936"
Community content is available under CC-BY-SA unless otherwise noted.