How to Train Your Dragon Wiki
Register
Don't have an account?
Sign In
Advertisement
in: Dragons, Dragon Species from the Books, Bog Dragon Class,
and 11 more

The Venomous Vorpent is a very small poisonous Bog Dragon, which appears at the end of How to Speak Dragonese and causes the events in How to Cheat a Dragon's Curse. They remained unaligned in the Dragon Rebellion.

There is some slight variation in depiction of Venomous Vorpents by author Cressida Cowell. Each image does show a long, thin, and small dragon which is yellow in color and has two long fangs in the front of its upper jaw. All pictures also show a large arrow-shaped tail fin, and most show some sort of poison sacs on its neck.

Their classification is also not clear - in How to Speak Dragonese, they are a nanodragon called a Venomous Vorpent and about the size of Ziggerastica, whom is an Emperor Beetleboog Bolderbug. However, in The Incomplete Book of Dragons, Venomous Vorpents are listed as very very small Bog Dragons.

Venomous Vorpents can sting with their tails to deliver the poison, or also from poison sacs on its neck—presumably delivered by bite. The resulting illness is called Vorpentitis, which is always fatal. The only cure is the vegetable that shall not be named, i.e. a Potato. Venomous Vorpents are also able to numb their victim first, so that the victim is not aware that they were stung. Humans aren't the only causalities; dragons can get Vorpentitis as well. The duration of illness before succumbing to death can vary greatly.

The author added a poem to How to Cheat a Dragon's Curse about the Venomous Verpent and its poison.

Alvin the Treacherous had slipped a Venomous Vorpent inside Hiccup's Dragon book as a trap. This, however, was before Hiccup pretended to be the Norse God Thor and hovered in the air with the help of the Nanodragons. Alvin attempted to remove the dragon before he gave the notebook back to Hiccup, but Hiccup snatched it from him too quickly. At one point on the hot-air balloon ride out of Fort Sinister, the Venomous Vorpent's sharp tail popped the hot air balloon and Hiccup or Fishlegs got stung but it. The dragon drops out of the story at this point, though it does appear (as an illustration, with words written around it) in the epilogue, stating "I don't like happy endings. They are too neat, too nice. I like a little spice in my stories", implying that one of the two had been stung by it.

As Book 4's title implies, the major plot revolves around the Vorpentitis caused by the Venomous Vorpent to one of the boys in Book 3. It is believed to be Fishlegs through most of the book, but it turns out to be Hiccup. Hiccup is cured of the Vorpentitis when Fishlegs shoots him with an arrow from America that has been inside of a potato. This also makes Hiccup immune to Vorpent poison.

The witch tries to kill Hiccup with Vorpent poison, but because Hiccup is immune to Vorpent poison she fails. After Hiccup is banished he accidentally gets some on Grimbeard the Ghastly's last will and testament it reveals a map to the false Dragon Jewel.

Venomous Vorpents appear in this Reference Book and in the 'Dragon Key' at the back of the book. 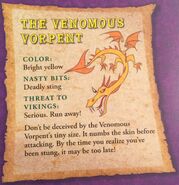 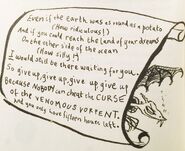