How to Train Your Dragon Wiki
Register
Don't have an account?
Sign In
Advertisement
in: Dragons, Dragon Species from the Books, How to Betray a Dragon's Hero,
and 6 more

The Vampire Spydragon is seen in How to Betray a Dragon's Hero and How to Fight a Dragon's Fury in the How to Train Your Dragon (series).

The Vampire Spydragon is described as having a monkey-like appearance, but with bat's wings. In How to Betray a Dragon's Hero, it is also described as having a thick hairy hide. It has the ability to camouflage itself so as to be effectively invisible, and therefore its exact color is not known. Only its red eyes may show up. Vampire Spydragons have two long serrated canine teeth, that are detactable.

The canine teeth of the Vampire Spydragon will break off into a bite wound on a victim as well as injecting a relatively mild toxin. The tooth acts as a homing beacon to the dragon, and will even make a ticking sound while imbedded in the victim's flesh. In humans, the toxin causes extensive bruising, swelling, and numbness at the bite wound and adjacent areas on the body.

Staring at a Vampire Spydragon's eyes can also cause some disorientation, which allows the dragon to more easily bite its prey.

Vampire Spydragons also have the ability to shed their tails as a last resort when trapped.

Vampire Spydragons can hunt in groups, however are not strict pack animals.

Hiccup is bitten by a Vampire Spydragon and is tracked by it throughout the book. The toxin in the tooth causes half of Hiccup's body to swell and turn purple. Through his many ordeals, it also contributes to him developing amnesia at the end of the book.

The Vampire Spydragon that bit Hiccup in the previous book finally catches up with him and attacks. Hiccup has amnesia, but manages to escape with the help of a Hogfly and his fragmented memories about dragons.

Vampire Spydragons are discussed in this Reference Book and appear in the 'Dragon Key' at the back of the book. 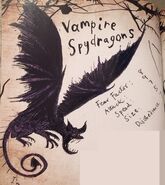 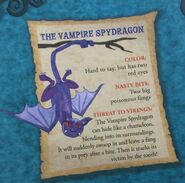