Valka's Seashockers made their debut in How to Train Your Dragon 2. One of them appeared in Dragons: Rise of Berk.

Final Days at the Sanctuary

When Toothless and Hiccup met Cloudjumper and Valka for the first time, Toothless ended up falling into the icy cold water. A group of several Seashockers emerged from the depth and pulled him to safety.

When Hiccup joined Valka for a meal, Valka's Seashockers were seen circling around the Valka's Bewilderbeast's mouth to chase fish into his mouth. They were rewarded with some fish afterwards.

Moving to the Hidden World

Although not seen in the film, it is assumed that Valka's Seashockers traveled alongside everyone from Berk and eventually arrived on New Berk. It is also assumed that they went to live in the Hidden World, along with every dragon from Berk.

Valka's Seashockers appear to be dark blue like ordinary Seashockers. They have rows of sharp, black fins on their backs. However, one of them is purple with yellow spots and spikes on his body in Dragons: Rise of Berk.

These Seashockers are described to be faithful and helpful in Rise of Berk. They pulled Toothless to safety in the icy cold waters when he fell in. Like most Seashockers, they display incredible teamwork skills as they work together to herd shoals of fish into the Bewilderbeast's mouth.

Although never shown in the movie, these Seashockers shared their own species' ability to create an electric shock. 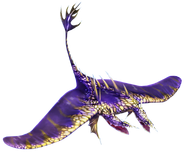 In Rise of Berk.

Retrieved from "https://howtotrainyourdragon.fandom.com/wiki/Valka%27s_Seashockers?oldid=436282"
Community content is available under CC-BY-SA unless otherwise noted.