How to Train Your Dragon Wiki
Register
Don't have an account?
Sign In
Advertisement
in: Expansion Needed, Dragons: Rise of Berk, School of Dragons,
and 2 more

Adjacent to the Isle of Berk

Valka's Sanctuary is a structure introduced in the game, Dragons: Rise of Berk that later appeared in School of Dragons.

The exterior of Valka's Sanctuary is mainly composed of the Bewilderbeast ice, mimicking Valka's Mountain seen in How to Train Your Dragon 2. In the game the structure has two levels. The first level has banners and posts at the entrance. The second level has the banners and posts, with some additional icy or rocky structures at its base, stylized patterns etched in the Bewilderbeast ice, and a discarded dragon trap in the water next to it.

Valka's Sanctuary is a training area for Berk's dragons to level up to Titan Wing size and ability. The dragons are trained by Valka. Initially only one dragon can be trained at a time, but additional slots can be purchased for runes, the in-game currency. Each training session with a dragon only gives a chance of levelling up, with the chances increasing each time. You also get either wood, fish or runes after each training session. 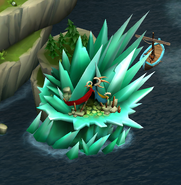 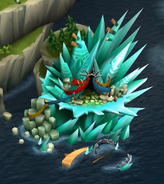 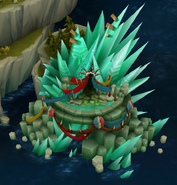 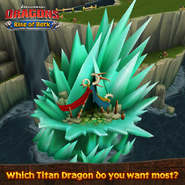 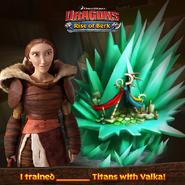