How to Train Your Dragon Wiki
Register
Don't have an account?
Sign In
Advertisement
in: Dragons: Titan Uprising, Events, Events on Berk,
and 2 more

To celebrate love and affection

Schematic drawings by Toothless of the Light Fury in How to Train Your Dragon: The Hidden World

Valentines is an annual holiday which is celebrated on the Isle of Berk.

Every year around the real life Valentine's Day, Rise of Berk releases thematic dragons, such as the Sweet Wraith, and costumes, such as the Cupid Meatlug and the Floral Crown Hookfang.

After witnessing Toothless etching drawings of the Light Fury in the sand in order to win her love, Hiccup reported the situation back to his fellow Berkians, who adopted their own form of the practice, starting the tradition of Valentines.

During Valentines, Berkian youths cut paper geometric sigils and adorn them with funny slogans of Toothless and the Light Fury courting each other. The youths then secretly leave these cards in the homes of their crushes, hoping that these talismans will cause the objects of their affection to turn their attention to them and them alone.

During Valentines, the Light Fury paints herself with ochre patterns resembling the geometric sigils on the Berkian Valentines cards.

During Valentines, certain dragons are dressed up in costumes to celebrate the holiday, such as Cupid Meatlug and Floral Crown Hookfang.

During Valentines, lovers gather to watch the Light Fury as she flies through the sky over the village. Young lovers who see her have their hearts full of hope and lovers who have already gotten together gather on hillsides to watch her. 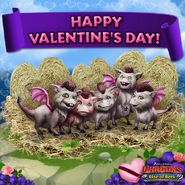