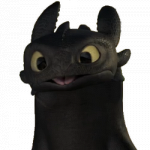 I am a huge fan of the movie and have read all the books up to date. I am 19 and working on scientific studies in college. I extremely happy and priviledged to be an Admin of this wiki, one of the largest How to Train your Dragon sites in the world. Night Fury is by far my favorite dragon. I also own and have beaten the video game.

I own the movie on blu ray and have watched it many times. I really like Toothless and Hiccup. I have purchased all the Dragons: Riders of Berk episodes in HD. I have designed a lego Nightfury and purchased it from LDD. I have made almost every dragon in LDD but I cannot afford to purchase all of them.

The movie and everything about it are all just so great. I am planning to write a long explination on why it is my favorite movie of all time, but for now I will just have to say that it is all around amazing. I loved the story. Hiccup's role was so good, and he was so easy to engage with. I often affiliate myself with him, and I feel often that I liked the movie because all my life I have been sort of Hiccupish. Toothless was magical. The bond between boy and dragon was handled better in this movie than any other franchise. Toothless held all the terrifying traits that define a dragon while becoming a fully adorable and faithful friend to Hiccup. He lost none of his coolness or sense of danger, but he is the type of animal that one can only long for. Hiccup along with Toothless captured me instantly. I admire and act Hiccupish, and I am fascinated and enthralled with Toothless. Man, what I would give to have Toothless the Night Fury.

I don't think there is just one thing that makes me feel so Hiccupish. I would say there are many. His deep sense of pitty is extremely touching. I greatly affiliate with that. I am often around people who seem to relish or at least not mind violence. Reptiles are also extremely unpopular around these people. Now we have to eat to live, but I always feel a bit sad to see anyone or anything suffer. Hiccup even pitties Mildew, the man who has tried time after time to ruin his life, and that is something to admire. Even though Mildew tricks him in the end, Hiccup's kind heart shows through, and I greatly admire that. Next thing I think that impresses me most about him, and that I wish to immitate, is his absolute loyalty to Toothless. Man, I hope that I am that loyal to my own friends. And as I have said in the last paragraph, I would give just about anything for Toothless! Finally Hiccup's courage mixed with reason. I have only had a few times in my life where I have had to be courageous, but in those times, it has been an extremely stressful ordeal. And Hiccup is not just courageous for the sake of courage! He does it because he knows it is the right thing. He stands alone against the whole world in the main movie because he sees that what they are doing is wrong. He is not a compromiser, and he gives up everything (your father, your tribe, your best friend...) for the sake of doing what he has discovered is right! He is so unquestionably faithful to Toothless throughout the movie, and Toothless is exactly the same. Together they turn the world upside down, and that is something to admire!

I do have a blog that I have recently started. It is mostly to post my HTTYD drawings and stories, but there will be opions and reviews on there as well. If you would like to check it out, here is the link. Hope you enjoy.

I go by the same user name on Disquis (if you catch me on the grapevine), and my Tumblr name is usertoothlessthenightfury (becasue somebody had already take my other name, so I thought I might as well use my wiki page's URL as my username!)

I also went to the httyd Live Spectacular. And it was truly SPECTACULAR! Here is a review I wrote when Dreamworks Dragons asked me to report on their show.

"The show was incredible. The entire floor and back wall worked together with projectors to make environments. The dragons were incredible. The big ones looked so cool when they first came out. A big door would open and all this smoke and red light would come out, then you would see the dragon's eyes glowing in the darkness. As soon as the monstrous nightmare walked onto the stage, I was awestruck! The thing was huge, and all its movements, mannerisms, and attacks looked really really cool! The nighfury was great! The flight scenes were really well handled using suspension wires on the dragons and the incredible projectors. It was the kind of thing you would have to see. The agility was really cool. The nightfury played toothless's role in the forbidden friendship scene really well (regurgitating fish and everything). The nightfuy drew on the ground with its breath and the projector kept up with the charring perfectly. Overall I was extremely impressed. The company did an amazing job!"

Dragons: Riders of Berk is wonderful. So far I have really liked the episodes. In Dragons We Trust was beautifully handled. It did such a good job with the kids having to say good bye. I can't imagine them doing any better! The episode was actually really sad and had great emotional depth, and that is something that I think is unique to Dragons: Riders of Berk. My favorite episode is probably "What Flies Beneath" right now. The action and Toothless centered plot really worked well together. Plus it is nice to see Toothless and Hiccup beat another very dangerous opponent. Next I need to discuss episode 19. I must say that I was pretty sure they would not find other Night Furies. I also was suspicious of Mildew being in league with Alvin ever sense episode 5, but this epsiode still was absolutely shocking! The traps and tricks Mildew laid were so stinking evil! Man the end was depressing, but it is great build up. Ug...I wish something really bad would happen to Mildew. He has gone way to far this time. He is doing a really good job of ruining the life of the two best characters of all time!

The season is now over...and man what a season it was! Could it have been any better!? Even the epsiodes which were not my favorites had such good moments in them! What a spectacular finale as well!! They took a cliche looking kiddy plot (one bad guy feels bad, so he decides to be a good guy in the end) and flipped it on its head! I was nothing short of shocked!! Man what a clever plot writer! It was great to see Hiccup and Toothless both being able to escape on their own. Plus when Hiccup is not there and Toothless is tryng to rescue him, all the stops are pulled. He anhiliated those Outcasts! Man that was neat to see that he is still a really, really dangerous dragon. Then Hiccup and Toothless finding each other was very touching. The ending was an odd and amazing mixture. In one way the Hooligans really have won! Hiccup is safe, Berk is celebrating, Toothless is extremely happy, and about twenty five Outcasts are either wounded or dead! So that sounds good right? But then on the other hand, Alvin...trains....a...DRAGON!!! And he's not just riding it and beating it into submission! He is bonding with it!! So in that way the Hooligans have pretty much lost! The series could not have been better in my mind, and I am so thankful to have seven more hours of HTTYD material to watch. Man if they can do this good with a bunch of low budget, twenty minute episodes, what wonders will they achieve in the sequel!?

Now I OPENLY admit that there ARE things in the series that are far from perfect, and I can certainly see things (especially in the attitudes and actions of certain characters) that could have been better in a perfect world. HOWEVER, for what it was, for the budget and time frame that it had, Riders of Berk was absolutely amazing! It was by far the best and deepest animated telivision series I have seen yet, and I for one am very pleased with it. It is not the movie by any stretch of the imagination, but I think it did a great job expanding on the adventures of Hiccup and Toothless! I look forward to Defenders of Berk this September!

I have written one (but maybe someday more) HTTYD fanfiction. I have posted in the blog section of my profile, so if you would like you may read it. I hope you enjoy it. Please leave me a comment if you like it or have advice or complaints or critisms (though hopefully none of them!).

It is called Storms and Strike Class

I am also currently thinking about another one! I have asked around, and some users seem to like the plot idea. I am not sure of the title yet, but I think it will be something like: A red death to rival the Red Death. It will be set to happen betwene episode 15 and 16 if I wind up writing it!

I have been working on my own version of the journal Hiccup keeps. It has info and pictures on dragons, and best of all Toothless. It is far from complete, but I do enjoy working on it. I am going to post some camera photos of some of the pages. I hope you all like them. I have many more, and I will post them occasionally. It takes them a long time to upload.

So I must point out that if any of you are looking for an incredible httyd fan, I would highly recomend speaking to our User:AddyD . He has really motivated me towards doing more dragonish projects, and been an all around great friend. I feel that I must give him a tribute on my page becaue he has quite simply inspired me!

Retrieved from "https://howtotrainyourdragon.fandom.com/wiki/User:Toothless_the_Nightfury?oldid=270135"
Community content is available under CC-BY-SA unless otherwise noted.