How to Train Your Dragon Wiki
Register
Don't have an account?
Sign In
Advertisement
in: Animals, School of Dragons, Livestock,
and 3 more

The Turtle is a reptile that appears in the game School of Dragons.

Turtles are reptiles (Order Testudines) known widely for their unique "shell" around their bodies. All turtles have an upper shell (the carapace) and a lower shell (the plastron), and some species can retract their other body parts in between the shells as a defensive mechanism to avoid predators. The shell itself arises from, and is fused to, the ribs and spine of the turtle. The outside shell is covered with epidermis either in the form of hard plates (scutes) or tough skin (as in the case of some sea turtles).

The term "turtle" can also vary depending where in the world it is used - in the US "turtle" tends to refer to any member of the Order Testidines and include terrapins and tortoises. In British English, "turtles" generally refer to Testudines species that live in or around water and can swim, as opposed to tortoises, which are strictly land-dwelling members.

Turtles are not found further North than Denmark or the British Isle, except perhaps a few Leatherback Sea Turtles in the ocean. Danish Vikings may have encountered the European Pond Turtle (Emys orbicularis) though, and this species appears similar to the turtles appearing in School of Dragons.

In the game, School of Dragons, turtles are raised for their eggs. A Farm Job highlights their edibility when the player is asked to provide turtle eggs because "Bucket is going through a turtle egg sandwich phase." Turtle eggs are also harvested to feed to dragons, as illustrated by a Farm Job asking for turtle eggs, carrots, and corn for Fishlegs to concoct treats for Meatlug.

Turtle shells are used by vikings as pauldrons.

In reality, the flesh of turtles is considered a delicacy in a number of cultures. Fat from turtles is also used as a main ingredient in cosmetics. Turtle plastrons are used in some traditional Asian medicine practices. Turtle eggs are also eaten by humans, but not on a large scale.

Turtles are the only non-seasonal animals that are purchased in Trader Johann's Shop with gems. After feeding, a turtle produces 6 eggs in 3 hours to be used by the player to complete Farm Jobs.

Turtles inhabit Hobblegrunt Island in a vernal pool - a temporary pool - that appears and is investigated by the player and the Dragon Riders.

During the "Wrath of Stormheart" Expansion, Skulder the Archaeologist mentions turtles briefly when giving examples of creatures with bony exoskeletons.

A turtle shell is an item that be found when searching with Toothless and used for completing collections.

A turtle-shaped rock, called Turtlith, is a seasonal decoration that was introduced in the game with the 1.59 update. It costs 500 Loose Leaves and requires 1 hour and 30 minutes to be built.

The former Outcast member, Savage, is often seen in DreamWorks Dragons: The Series TV shows with a pauldron on his left shoulder made from some kind of turtle carapace. 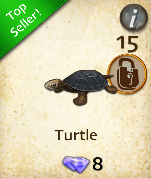 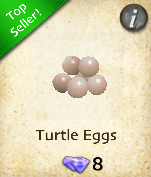 Sea turtle at the Ship Graveyard 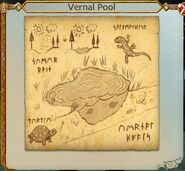 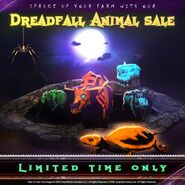