How to Train Your Dragon Wiki
Register
Don't have an account?
Sign In
Advertisement
in: Animals, School of Dragons, Human Food, Dragons: Titan Uprising

Turkeys are mainly seen seasonally in the game, School of Dragons.

Turkeys (Meleagris gallopavo) are large birds with limited ability to fly. They are native to the Americas and do not occur in Scandinavia, so Vikings would not have come across these birds. Turkeys are wild, but have been domesticated in a few historical events by Native Americans. Domestic Turkeys however are still the same species as their wild counterparts.

In the game, School of Dragons, turkeys are kept to harvest feathers from. This actually somewhat holds true historically as turkeys were used by Native Americans for their feathers in ceremonial items and blankets before any other usage. In a School of Dragons Farm Job, Trader Johann asks the player for turkey feathers to decorate hats with.

In another School of Dragons Farm Job, turkey feathers are needed as instruments of tickling! In this case, tickling a Gronckle's belly will cause them to spit up lava, and Fishlegs has found a novel rock to feed Meatlug.

Turkey legs appear in the eighth scene of this children's "seek and find activity book. No live turkeys are noted.

In Twintuition, Tuffnut mentions turkeys while making up a story that he fought a dragon rider.

In the episode, "Ruff Transition", Ruffnut must bond and care for a baby Razorwhip named Wingnut. One exercise is to develop a call that the baby will respond to. Wingnut completely ignores Ruffnut's attempts, but from behind a tree, Tuffnut lets out a Turkey call. Wingnut immediately responds.

Turkeys are an animal the player can raise and harvest on their farms. Turkeys provide feathers for the player to use to complete farm "Jobs" provided by Trader Johann. Turkeys are also a seasonal animal, only available for purchase around Thanksgiving/harvest time in the U.S.

Turkeys also appear in the Quest "The Mischief of a Twin", in which the player must find rabbits and turkeys the Twins have let loose around the School.

Turkeys are mentioned in the description of "Thanksgiving Meatlug." It is stated that turkeys are not native to the Barbaric Archipelago, suggesting that all turkeys seen in the rest of the franchise may have been imported from the outside world by traders, and that some Vikings, such as Fishlegs, actually believe that the turkey is a bird of prey due to a lack of an accurate frame of reference.

Turkey leg in Look And Find: How to Train Your Dragon 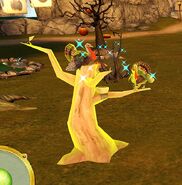 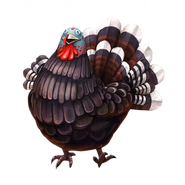 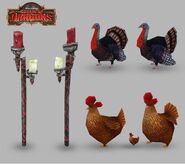