watch 01:50
Wiki Targeted (Entertainment)
Do you like this video?
Play Sound

Tuffnut Junior is a character from the How to Train Your Dragon book series.

Tuffnut Junior is one of the Hairy Hooligan Novice Vikings. Though his experiences were not discussed in Book 1, Tuffnut evidently grabbed an Eaglefly from the Dragon Nursery, to train as a Hunting dragon.

Tuffnut Junior, along with all the other initiates of the Hairy Hooligan Tribe and Meathead Tribe were exiled for failing the Final Initiation Test on Thor'sday Thursday. A violent storm washes several Seadragonus Giganticus Maximus ashore on the Isle of Berk. Tuffnut and the other initiates carry out a plan Hiccup concocted to pit the Green Death against the Purple Death by dropping feather bombs on the dragons and hurling insults at them. Ultimately, the two dragons kill each other, but not before the Green Death seeks revenge on Hiccup.

Tuffnut Junior is listed as a student in the Pirate Training Program in How to Be a Pirate, meaning he participates in lessons such as 'Swordfighting at Sea (Beginners Only)'.

During 'Advanced Rudery' lessons, Tuffnut Junior is pitted against Snotlout. He is not very good at Rudery and Snotlout beats him thoroughly, moving to the top of the class.

As a Pirate Training Program student, Tuffnut Junior built a small ship named The Raven in 'Shipbuilding' lessons, along with his partner Sharpknife. They then participate in 'Board-an-Enemy-Ship' lesson on the Sea-Known-As-Woden's-Bathtub, along with the other novices. They are to board a Peaceable fishing boat, menace them, and take a helmet as a trophy. Sharpknife and Tuffnut Junior are one of the first pairs to spot the fishing ships amongst the fog on the sea.

Later, while waiting for Gobber to appear in the Great Hall for a 'Frightening Foreigners' lesson, Tuffnut Junior and Sharpknife "were having a swordfight in one corner."

As part of the young Vikings' education, Tuffnut Junior and the other Hooligan boys gathered on Huge Hill for a 'Herding-Reindeer-on-Horseback' lesson on an extremely hot day. During this lesson, the boys ride their pre-selected Riding Dragons for the first time. Tuffnut's is a "Rocket Ripper with go-faster stripes along the sides." The lessons turn deadly when the Reindeer and students are surrounded by flames caused by deadly Exterminator dragons. Most of the young Riding Dragons flee, leaving the boys in the fire. Gobber's Riding Dragon Goliath slowly evacuates the students, two-by-two, to safety.

Though athletic, Tuffnut Junior is portrayed as a lean boy with a long face. His nose is crooked from an accident in his younger years. He wears an earring in his left ear.

Tuffnut Jr. is "naturally a good-natured boy, and insults were not his strong point", making him a poor student in 'Advance Rudery', as seen in How to Be a Pirate. He is also described as being quick-tempered and fierce, but not necessarily mean. 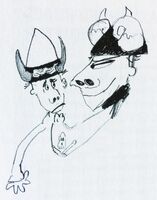 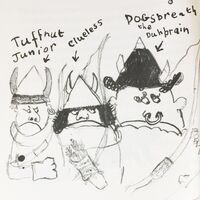 In Book 4
Add a photo to this gallery

Retrieved from "https://howtotrainyourdragon.fandom.com/wiki/Tuffnut_Junior_(Books)?oldid=758207"
Community content is available under CC-BY-SA unless otherwise noted.