Triple Strype is a Triple Stryke that appears in the game Dragons: Rise of Berk.

Triple Strype is dark blue with half of its wings red with white dots. Its belly is red, but the center of it is white. One of its tails is blue, one is red and one is white, with all three stingers being white. Its wing claws are light blue and his other claws are white. Its head is blue with the lower jaw being red and the nose and ear-like appendages being white. 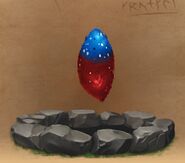 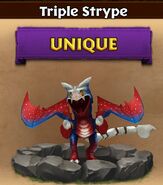 June 2019 Gauntlet Events
Add a photo to this gallery

Retrieved from "https://howtotrainyourdragon.fandom.com/wiki/Triple_Strype?oldid=531156"
Community content is available under CC-BY-SA unless otherwise noted.