Trancemare is a brilliantly colored Flightmare that was tamed an trained by Ruffnut. She and Trancemare will worship the God Loki, presumably by trickery and playing jokes.

As indicated in a Dragons: Rise of Berk Gauntlet event, Drago Bludvist captured Trancemare and exposed it to Dragon Root in order to use it against the Dragon Riders.

Trancemare has a brilliant pink and violet body with hints of blue and orange that glows very brightly. 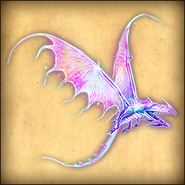 Retrieved from "https://howtotrainyourdragon.fandom.com/wiki/Trancemare?oldid=376110"
Community content is available under CC-BY-SA unless otherwise noted.