How to Train Your Dragon Wiki
Register
Don't have an account?
Sign In
Advertisement
in: Dragons, Dragon Species from the Books, Bog Dragon Class,
and 5 more

The Toxic Nightshade is a small Bog Dragon mentioned in A Hero's Guide to Deadly Dragons.

Toxic Nighhtshades are small dragons are bright yellow in color as a testament to their toxicity. One image shows them to look similar to an iguana. They appear to have one pair of large purple eyes.

Toxic Nightshades are, as their name implies, poisonous.

There is some contradictory information as to how one might subdue a Toxic Nightshade. In A Hero's Guide to Deadly Dragons, blowing in their eyes will do the trick. In The Incomplete Book of Dragons, tickling them behind the ears will put them in a trance. To note, the picture of the Toxic Nightshade does not show ears, or at least ear pinna (flaps).

Toxic Nightshades make a clicking or ticking noise as a auditory warning that they are poisonous. Just this warning sound can send some dragons scurrying away in alarm, such as the Flying Gator.

According to Hiccup's own dragon information pages, the Toxic Nightshade is a nocturnal species.

They remained unaligned during the Dragon Rebellion.

Toxic Nightshades are mentioned in this Book when Hiccup and friends are stuck inside the Meathead Public Library and are trying to escape from Driller Dragons and the Hairy Scary Librarian.

Toxic Nightshades are discussed in this reference book and also appear in the 'Dragon Key' at the back of the book. 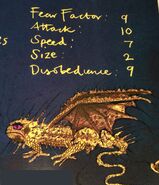