How to Train Your Dragon Wiki
Register
Don't have an account?
Sign In
Advertisement
in: Plants, School of Dragons, Dragon Food,
and 3 more

Tomato is an edible crop appearing in the game, School of Dragons and mentioned briefly in "King of Dragons, Part 2".

Though technically a fruit, tomatoes (Solanum lycopersicum) are one of the most common vegetables in the world. They are part of the family Solanaceae. The leaves and stems contain small amounts of toxic substances such as tomatine and solanine. However, they are dangerous only if they are eaten in large amounts.

Tomatoes originate in Mexico. However, after the colonization of America they have been spread around the world.

Tomatoes are primarily used as food for humans in both franchise and real life. One School of Dragons Farm Quest implies that Night Terrors also like tomatoes.

Tomatoes have been used to produce a pink dye in reality, and this usage is touched upon in a Farm Job that asks for tomatoes to produce red paint in School of Dragons. In another Farm Job, tomatoes are asked for in conjunction with other ingredients for orange paint. A third one asks for tomatoes and other produce to make paint for Bucket.

In the final episode, "King of Dragons, Part 2", Spitelout exclaims that they'll crush the enemy "Like a ripe tomato under me armpit", when Astrid instructs him and Snotlout to engage a particular flank of Dragon Hunters.

In "First Flight, Part 2", a tomato is among the many types of food Tom tried to feed Thunder.

Tomatoes are cultivable plants in this game and are harvested to complete Farm Jobs. They can be purchased from the shop for 4 gems. Their seeds can be purchased for 84 coins. They produce 5 tomatoes in 30 minutes.

In September 2017, "titan" tomatoes were released to grow in the player Farm. These are large-sized tomato varieties that Phlegma the Botanist bred, along with "titan" pumpkins.

Images of tomatoes appear in Loki's Maze of Cheers during a labyrinth part.

During the summer season of 2020, the seasonal decoration called Viking Picnic was introduced in the game, with a basket of tomatoes being part of it. It can be bought for 60 Festive Fireflies and takes 40 minutes to be built. 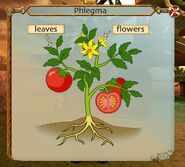 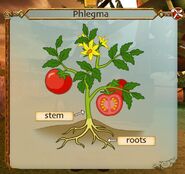 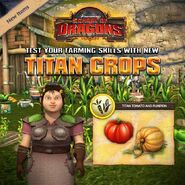 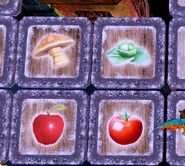 In Loki's Maze of Cheers

In the Snoggletog Maze