How to Train Your Dragon Wiki
Register
Don't have an account?
Sign In
Advertisement
in: Article Stubs, Objects, Book Objects,
and 5 more

Used by Hiccup to determine direction, tell time, time activities, detect whether someone is telling the truth, and many others

During the events of Book 4, the Ticking Thing was in the possession of the Hysteric Tribe. Specifically, it lay in a small, iced casket alongside the mythical potato, being held by the frozen corpse of Norbert the Nutjob's father, Bigjob. It is unknown how he came into possession of it.

Hiccup and Camicazi infiltrate the Hysteric Great Hall on Freya'sday Eve on a 'Quest for the Frozen Potato'. A potato is the only known cure for the fatal Vorpentitis, which Hiccup's friend Fishlegs may have contracted. Camicazi is able to steal the potato with her superior burglary skills, but is unable to resist taking the object next to it: the Ticking Thing. Its removal sets off a chain of events that ultimately has the two children pursued by angry Hysteric warriors.

The Ticking Thing has many arrows that have multiple different functions. According to a drawing made by Hiccup, it can work as a compass, work as a lie detector, tell time, function as a timer for up to three months, five days, and six hours, help crown the King of the Wilderwest, and has several other functions which currently remain unknown. One of these is most likely something to do with weather, like a barometer.

The Ticking Thing on a map of the Barbaric Archipelago 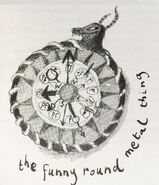