How to Train Your Dragon Wiki
Register
Don't have an account?
Sign In
in: Ships, Objects, Franchise Objects,
and 2 more

School of Dragons
("Rise of Stormheart")

School of Dragons
("The Hidden World")

The Tempest is a unique ship that appears in the expansion, "Rise of Stormheart" in the game, School of Dragons.

The Tempest is an enormous bifurcated ship laced with huge metal spikes on the two fore sections. There are at least three levels, possibly more. The visible habitable area is covered with a teal colored tent-like material. The captain, Nikora Stormheart, monitors ship activity from the rear of the ship. By some unknown mechanism, the spiked fore sections are able to roll open and closed, allowing smaller craft to sail into an open area of water surrounded by the ship.

The ship itself appears to be steam-powered, with two smoke stacks and two large paddled wheels. The source of the steam and energy may be the Moldruffle dragons and a Titan Gronckle that appear on a sub-level. There are also dragon-proof cages in the presumed engine area as well as on deck. Many areas of the ship are decorated with skulls and the triskele designs associated with Stormheart. 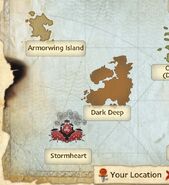 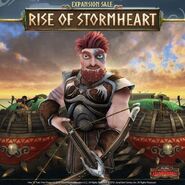