The Solid Sea is a location that appears in the game, Dragons: Titan Uprising.

The Solid Sea, as its name suggests, is a frozen sea of ice. There are a few largish snow-covered islands with a few evergreen trees. There are also some Sea Stacks around the islands and drift ice floating in between. A couple of Viking stone structures can be found on the islands. Later in the game, the region takes on a decidedly green pall, after the Dragonroot Company sets up various camps.

The Solid Sea is the third sub-section of the Frozen Tundra the player encounters. Several wild dragons reside here that the player must fight in order to advance in the game. Dragons seen here include but not limited to: the Deadly Nadder, Hideous Zippleback, Monstrous Nightmare, and Timberjack.

The Solid Sea is also a region in the "Coldwind Wastes", and is the first section the player encounters after the area is occupied by the Dragonroot Company. 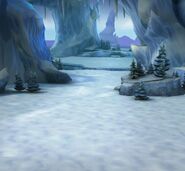 In the second visitation

Retrieved from "https://howtotrainyourdragon.fandom.com/wiki/The_Solid_Sea?oldid=362506"
Community content is available under CC-BY-SA unless otherwise noted.