The Hollow Woods is a location that appears in the game, Dragons: Titan Uprising.

The Hollow Woods is a series of islands in a volcanic region. They are composed mostly of beaches with white sand, but also have huge rocks and boulders. There are occasional evergreen trees that appear rather ashen.

Later on in the game, the Hollow Woods is still occupied by the Dragonroot Company. The area has become even more darkened and cast in a red hue.

The Hollow Woods is the first sub-section of the Burning Barrens section. Several wild dragons reside here that the player must fight in order to advance in the game. Dragons seen here include but not limited to: the Deadly Nadder, Hideous Zippleback, Monstrous Nightmare, and Timberjack. 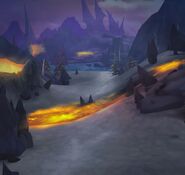 During second visit in Blistering Badlands

Retrieved from "https://howtotrainyourdragon.fandom.com/wiki/The_Hollow_Woods?oldid=382806"
Community content is available under CC-BY-SA unless otherwise noted.