The Thaw Fleet is a group of Gronckles introduced in the mini-comic, "Thaw Fleet".

Aftermath of the Eruption

Though the new village location for Chilblain is out of harm's way from the volcano, Mount Ymir, the villagers must deal with the after-effects of volcanic activity - the thawing and freezing of the snow and ice. It makes it very difficult to send off iron ore shipments on the slalom sleds. Hiccup uses Toothless to push the sleds under dragon power and is successful. Fishlegs astutely points out that Toothless is one of a kind, and unless he plans on staying in Chilblain, the villagers' issue is not solved. After a few days, Fishlegs modifies Hiccup's idea to work with Gronckles, who may be slower, but are steady and readily available. His solution works. Gunilla and Kettil then introduce a group of native Gronckles, dubbing them the "Thaw Fleet".

The Thaw Fleet is composed of Gronckles. Those shown in the Comic are all uniform brown and look nearly identical to Meatlug. 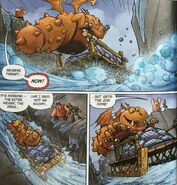 Retrieved from "https://howtotrainyourdragon.fandom.com/wiki/Thaw_Fleet_(Characters)?oldid=535943"
Community content is available under CC-BY-SA unless otherwise noted.