In a Sticky Situation

Possibly while exploring the area around a scuttled Dragon Hunter ship at Scuttleclaw Island, this Night Terror got some pine tar stuck on his body and wings, causing him to be unable to fly. He was spotted by Eret's Crew, who sent a Terror Mail to Eret. Eret and the player went to Scuttleclaw Island and helped remove the pine tar with lemon-oil impregnated rags. The Night Terror was then able to return to his small flock safely.

At first meeting, the Tarred Night Terror appears black with a dark orangey-yellow back. However, after the player wipes him clean of pine tar, his true coloring is revealed to be a greenish lemon with a darker yellow pattern on his back. 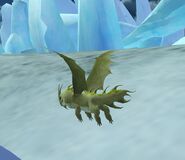 Retrieved from "https://howtotrainyourdragon.fandom.com/wiki/Tarred_Night_Terror?oldid=570649"
Community content is available under CC-BY-SA unless otherwise noted.