Director on Dragons: Race to the Edge and Dragons: Rescue Riders

Theodore J. "T.J." Sullivan is a director on Dragons: Race to the Edge, and Dragons: Rescue Riders.

T.J. Sullivan was born in Milford, Connecticut and attended Central Connecticut State University. His first animation job was working on medical videos in Connecticut. From there he moved to California to take a job with DreamWorks Animation.

T.J. Sullivan has been nominated for an Annie Award for Outstanding Achievement for Directing in an Animated Television/Broadcast Production for the episode "Sandbusted" in 2018. Previous nominations include another Annie Award for Outstanding Achievement in Directing in an Animated TV/Broadcast Production for the episode "Reign of Fireworms" in 2016, as well as two Daytime Emmy Award nominations in 2008 and 2014.

T.J. Sullivan was a director for: 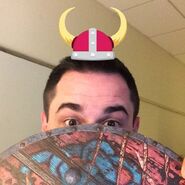