Dragon of the Auxiliary Team

In "Team Astrid", Sven chose this monstrous nightmare as his dragon following Dagur's attack on Berk when he joined Astrid's Dragon Riders' Auxiliary. He then assisted in defending Dragon's Edge from Dagur's fleet.

As shown in "A Time to Skrill", Sven and his dragon joined Gustav, Spitelout, and Gothi in taking on the Skrill that attacked Berk. However, like the others, he and his Rider were shot down.

Attack on the Dragon Hunters

Sven's Nightmare participated in Hiccup's mission to retrieve the Dragon Eye and defeat Viggo in "Shell Shocked, Part 1". However, the riders found the island destroyed so Hiccup sent the Auxiliary Team back to Berk.

Battle against the Dragon Flyers

In "The Wings of War, Part 2", Sven's Nightmare went along his rider and Berk's fleet to Dragon's Edge, where they fought against the Dragon Flyers and won.

Sven's Nightmare is lime green in color with orange wing tips and dark green blotches on its body.

With Sven in "Team Astrid"

Protecting Berk in "A Time to Skrill" 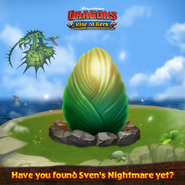