The Sundial is the earliest known device used to tell time. It is seen and mentioned multiple times in the DreamWorks Dragons Franchise.

The earliest known sundial possibly dates back to 3500 BCE in Egypt. It consisted of a single stick in the ground, and lines to measure the length of the shadow the stick cast depending on the time of day. The more modern models which are more commonly thought of today consisted of a circular platform with six or twelve time divisions carved into it, and a triangular pillar, or gnomon, which cast a shadow somewhere among the divisions, depending on the sun's placement in the sky. More intuitive designs were adjustable depending on the season, thus the length of daylight. They could be constructed from wood, stone, or metal, and were used primarily until the invention of the mechanical clock in the early 14th century. Today, sundials are mainly ornamental, commonly placed in gardens, parks, and other common areas.

A sundial first appears in "Heather Report, Part 1" when the Riders are testing their dragons' speeds.

A sundial appears again in "Worst in Show" while the Riders are doing rescue training. In "The Flight Stuff", Snotlout uses a sundial while training Gustav to take his place.

About three years later, a sundial is mentioned by Ruffnut in "Total Nightmare" when the Riders are playing "Beat the Dome".

Another sundial is seen again in "Family on the Edge" when the Riders are training at taking out the Dragon Hunters' fleet.

The player helps Astrid create a simple sundial to help Eret keep track of feeding time for three Rumblehorn Hatchlings he is babysitting, in the quest, "Rumbling Docks and Sundial Clocks".

In "Family on the Edge" 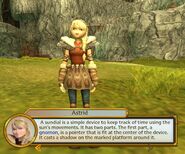 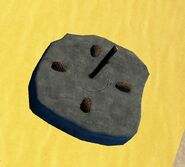 Retrieved from "https://howtotrainyourdragon.fandom.com/wiki/Sundial?oldid=672207"
Community content is available under CC-BY-SA unless otherwise noted.