The Submaripper is a gigantic Tidal and Tracker Class dragon that first appeared in Dragons: Race to the Edge.

In Dragons: Rise of Berk, the Submaripper egg appears to have a dense, round, solid core, which is surrounded by a transparent layer of liquid, which is coated by another membrane. Suspended in the substance appears to be several gas bubbles. The egg has a main solid color and v-shaped stripes of a different hue.

The Submaripper is a massive dragon. It is said to have teeth the size of Vikings. In addition, it has an unusually large head-to-body ratio for a dragon, and a rounded head and snout. It has several lobs and nubs on its back, along with stripes along its body. The Submaripper has short necks and wings. It also has frog-like legs with webbed feet.

The Submaripper can be best described as being similar in appearance to an eel with legs (as well as a few traits similar to frogs). It has various wattles and kelp-like structures that line its back and hang off its legs and sides.

A Titan Wing Submaripper turns dark green in color. Its snout and stripes are yellow, and its back is a darker shade of red. Its heart-shaped spines are bigger and it has grown some on its feet as well.

The Submaripper has the ability to create a whirlpool by sucking the nearby water into its mouth. It is powerful enough to suck down large ships or dragons that are around the size of Scauldrons and powerful enough to pull dragons that are above the water, although it appears to be less powerful underwater, as Hiccup is able to hold on to a rock and not get sucked into its maw.

Some Submarippers like Belchfast, are able to reverse their suction ability and instead expel water over vast areas.

Though this ability hasn't been seen, the Submaripper has been stated to be able to create massive tidal waves in order to drown its victims by slamming its massive body onto the water's surface.

The Submaripper is said to be able to vomit the shipwrecks it has ingested as harpoon-studded debris. However, this ability was never seen.

The Submaripper has proven to be an extremely strong dragon because it was able to take on a Titan Wing Shellfire by using a full-body tackle on the larger dragon. Underwater, the Submaripper can carry the weight of a large ship in its mouth, for Shipsbane could hold the weight of the cauldron with Hiccup inside, all while carrying Toothless on its tail to reach the surface.

The Submaripper has proven to be quite an effective hunter, as it was able to devour ships, people, and dragons quickly, after using its powerful whirlpool vortexes.

The Submaripper is shown to be able to take multiple of Toothless' plasma blasts without showing any sign of being stunned or damaged by the hit.

It is shown that the Submaripper is able to move much quicker in the water than the Shellfire as well as making faster turns. It was able to evade a Shellfire's attacks with ease.

Being a Tidal Class dragon, the Submaripper is able to hold its breath for long periods of time underwater and swim with ease at a high rate of speed.

When the Submaripper realized that Hiccup was the one who freed it and that he was drowning inside the diving bell, it returned the favor by bringing him and Toothless to the surface and placed them on their ship.

Despite its size, the Submaripper is quite a stealthy dragon, as it was able to sneak up on a Shellfire surrounded by sunken ships without any of the people or dragons around noticing.

The Submaripper exhales gas bubbles that have a foul odor, which can alert other creatures of its presence.

As with most dragon species, Submarippers are susceptible to the Dreaded Dragon Flu, according to Marena in "Sick Day".

Submarippers are aggressive and territorial, unwilling to let anything get close to them, whether they are humans or other dragons. They spend most of their time sleeping on the bottom of the ocean, but they can be woken by the slightest movement in the water.

Despite their hostile nature, Submarippers are grateful to those who help them, and will not hesitate in returning the favor.

While it is unknown if a Submaripper can be fully trained, it can be tamed to a certain extent. If one helps or saves a Submaripper, the dragon will stop being aggressive and will even return the favor. The Submaripper's undying loyalty will have been earned, as shown by Shipbane who followed the Dragon Riders to the Edge after they save him.

In "Dire Straits", tired of the Dragon Riders' attacks on his operations, Viggo Grimborn traps a Submaripper in the Straits of Baldur in order to prevent trade ships from reaching Berk. It successfully demolishes several ships, with only Johann, who had previously encountered another Submaripper, surviving. Upon discovering the creature, the Dragon Riders attempt to free it but are initially unsuccessful due to their inability to stay submerged long enough to break the chains holding it in place. Fortunately, Hiccup is able to create a device that allows him to reach the Submaripper's depth with an air supply and uses Changewing acid to dissolve the chains. The Submaripper, now free, carries Hiccup back to the surface after he becomes trapped on the ocean floor.

Viggo later locates Shipsbane or another Submaripper near Dragon's Edge in "Shell Shocked, Part 2" and disturbs it by dropping a dagger on it. The dragon then attacks the Shellfire, which Viggo reveals is the natural enemy of the Submaripper, which he had kept in place as a contingency plan. The Submaripper's attacks allow the Dragon Riders to free the Shellfire, with both dragons subsequently fleeing the scene of battle.

When Leyla asks Marena about a cure for the Dreaded Dragon Flu in "Sick Day", she tells her about a Titan Wing Submaripper, that once caught the flu and flooded an entire village while having a sneezing fit.

The Submaripper first appeared in this game along with its Titan Wing form and the individual Shipsbane. It was eventually added as a Legendary Dragon that unlocks the Submaripper Collections and decreases the refill time of Gauntlet lives.

The Legendary Submaripper finds unique items to complete special collections for smaller Submarippers, such as Death Song Amber Goggles and one of Viggo's Daggers. 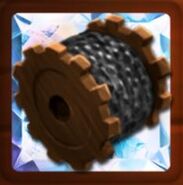 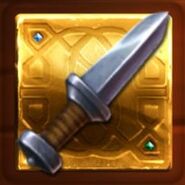 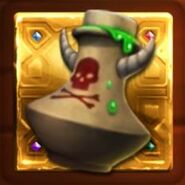 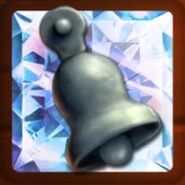 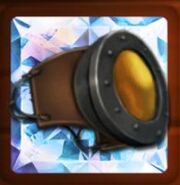