How to Train Your Dragon Wiki
Register
Don't have an account?
Sign In
Advertisement
in: Dragons, Characters, Dragon Characters from the Books,
and 19 more

Stormfly is a rare Mood-Dragon, made even rarer as she speaks not only Dragonese but also Norse. She is the hunting dragon of Camicazi, the heir to Bog-Burglar Tribe Tribe, in the book series. She first appeared in A Hero's Guide to Deadly Dragons and has appeared in every following novel.

Stormfly made her first appearance and helped Hiccup, Fishlegs, Camicazi and Toothless to navigate around the Meathead Public Library to the Animal Training section, where the book they wanted to find was, but the gang had to go the opposite direction that the lying dragoness pointed. When they found the book they were looking for, they encountered the Hairy Scary Librarian. A battle between the Librarian and the gang ensued. The two little dragons joined the fight, but Stormfly was knocked out by the Librarian when the villain lost his balance. When she awoke, she lost her memory and was unable to find the way out of the Library. Thus, the gang had to run in random directions, away from the pursuing Driller-Dragons. In her amnesiac state, she thought all the running and piling items against the door to defend against the Driller-Dragons to be just a game, and was enthusiastic about it. Later, Hiccup discovered the Dragon Whisperer's Way, which is a secret tunnel leading to the exterior of the Library but was filled with Poisonous Piffleworm dragons, the only way to paralyze these extremely poisonous dragons was to whistle, and Stormfly, having no idea how dire the situation actually was, was the only one among the gang that could whistle. They escaped the Library on the Stealth Dragon that brought them there in the first place. In the way to Berk, Stormfly flirted with the Stealth Dragon, causing Toothless, who was in love with her, to be jealous. Later, she regained her memory when she smelled the revolting stench of Madguts the Murderous, who she recognized as she spent her earliest dragonhood in the Murderous Mountains. She later admitted that the Stealth Dragon was really just a yes-man. She played with Toothless and followed Toothless to where the food was and promised Hiccup to keep an eye on the emerald dragon, just as she turned purple.

Stormfly and Toothless were accompanying Hiccup, Fishlegs and Camicazi in the swimming contest, serving as beacons so the contestants could be spotted easily. During the contest, the Vikings were kidnapped by Raptortongue dragons in the service of Norbert the Nutjob. They were brought aboard the The American Dream 2, as Norbert needed the Ticking Thing to navigate his way to America. Hiccup persuaded Norbert not to kill them as only he could read the Ticking Thing, and most of the time the gang and the two hunting dragons stayed in the crow's nest of the huge ship. Stormfly played with Toothless around the crow's nest most of the time. It was the two dragons that stumbled upon the way to escape from the boat. Stormfly and Toothless sneaked into the kitchen and ate the dragon nip in it, causing them to fall into a deep sleep and alerting Hiccup of its existence on the ship. Hiccup used the dragon nip to drug the Hysterics to sleep while he released the Northern Wanderer prisoners. But Stormfly, who coiled around Camicazi's neck when the girl was steering the ship, was having some sort of a nightmare and was squirming around ,causing the ship to move around erratically and smashed into an iceberg, sending Hiccup to lost his grip on the rope and landed before a pack of Polar Serpent Dragons. Later, when the American Dream 2 was destroyed by the Leviathorgan, the three Vikings hung onto a table and floated away from the land, Stormfly and Toothless tried to stop them, which ended in vain. They continued to stay with the Vikings, perching on the table's legs until they were rescued by the Northern Wanderer. Later, she accompanied the gang as they flew on Norbert's flying machine, and returned to Berk.

In the hands of UG the Uglithug

Stormfly was following Camicazi on her boat, the Stormy Petrel, at sea, when they encountered a storm and got lost. They were actually captured and imprisoned by UG the Uglithug. UG claimed that Stormfly was a Mood-Dragon, by right was his and Camicazi stole the dragoness from him. He then imprisoned Stormfly in his dragon stables until she learned better manners. Later, she was rescued by Humongously Hotshot the Hero and was returned to Berk, along with the throne, Fishlegs' lobsterpot and a letter from Humongously Hotshot and his wife. Stormfly shared a joyous reunion with her master, and told her that she bit UG many, many times, and was subsequently praised affectionately by Camicazi.

Stormfly accompanied Camicazi to Flashburn's School of Swordfighting, where she said that Flashburn was the perfect hero, causing Toothless to be jealous. She mused on the point that One Eye, for all his hatred for the humans, did not join the Dragon Rebellion. Later, she manipulated Toothless to enter the Witch's hut to steal the fortune cookies, which led to the events afterwards. She followed the gang down into the caves to seek the crown of Grimbeard the Ghastly. Stormfly saw the chain left by Flashburn and suggested the gang to follow it, which led to a tangled Flashburn. She left the cave system and onto the surface, and witnessed the exile of Hiccup and the Dragon Rebellion.

Stormfly resisted the Red-Rage and stayed loyal to Camicazi. Camicazi and her fellow Bog-burglars had set up an escape service to smuggle slaves out of Prison Darkheart. And on one of those missions, the person they tried to safe turned out to be Hiccup. Stormfly met Toothless, who was excited to meet her, and introduced the Wodensfang to her. Stormfly and Camicazi hid in the Hopeful Puffin 2's amber basket, and not-so-secretly followed Hiccup to look for the Dragon Jewel as Alvin the Treacherous and his mother along with their army followed him. She was with Camicazi when theDeadly Shadow snatched the entire sand-yacht away, she exclaimed that she loved Stealth Dragons (Deadly Shadows have the same ability to camouflage perfectly like a Stealth Dragon, leading to this misconception). Later, when she saw the true majesty of the Deadly Shadow, she batted her eyelashes and said the Deadly Shadow was magnificent. She later cried with the others as the last hope of Fishlegs was seemingly lost. Later, she escaped the Prison Darkheart when the Dragon Rebellion conquered the place.

As the gang was out investigating a human's plea for help, she agreed with Toothless that they should not leave their hideout, and that she had a tickly feeling behind her throat and that she would fetch Toothless' coat for him. However, Camicazi said it was probably indigestion problems and she had to stop swallowing squirrels whole. Stormfly turned black as she was offended by this, stating that she was a free spirit and free spirits do not get indigestion problems. She was saddened later when Camicazi was taken by the Vampire Spydragon the Witch sent, and further depressed by the fact that she was not so special after all, as Wodensfang could speak Norse as well. She followed the gang as Snotlout led Hiccup into a trap, and helped in chasing away the Winterfleshers and helped Hiccup and Camicazi to escape. She accompanied Camicazi and Fishlegs on the Deadly Shadows to create a diversion to allow Hiccup to escape with the King's Lost Things. Later, they saw Hiccup (in truth, it was Snotlout) being shot down from the Windwalker and was terrified that Hiccup might be dead.

Stormfly is a very flirtatious dragoness; she flirts with most male dragons she meets in the book, some not necessarily friendly. What she says when she is flirting with a dragon isn't always the truth either, as she sometimes turn purple when she flirts. An example of this is when she first met Toothless. She said he was 'viciously handsome', but her purple coloration marked this as a lie.

Despite how obvious her lies are, as her color turns to shades of purple when she does it, she is still a pathological liar. Camicazi says it is her nature and, as her lies are pretty obvious, no one seems to mind a lot.

Stormfly is also very playful, many of her flirting and lies derives from this point of her personality. She is often seen playing with Toothless on various scenes.

She also possess a certain level of curiosity and cunningness. When she is curious about something but she does not want to risk herself, she can persuade others to do the work for her, using her charm (and the victims' stupidity for not being able to see through her lies) to get what she wants. An example of this is when she tricked Toothless into entering the Excellinor the Witch's hut to steal the fortune cookies for her.

Stormfly is a very loyal dragon; she managed to stay faithful to Camicazi and resisted the Red-Rage when the Dragon Rebellion began, something only a handful of dragons could do.

She also has a very good sense of direction, able to navigate the maze-like Meathead Public Library with relative ease.

Stormfly takes a certain pride in her ability to speak Norse, and was disappointed to know that Wodensfang, too, can speak Norse.

Like most hunting dragons, Stormfly is a small dragoness, she is about twice the length of Toothless or Wodensfang.

Stormfly is a very beautiful dragoness. She looks a lot like a Chinese dragon with wings, with a long, sinuous, serpentine body and four limbs that ends in taloned claws. She has a line of spine that runs down from the back of her neck to the end of the tail which, like almost all dragons, ends in a pointed hook.

Stormfly has a pair of very big eyes with preposterously long eyelashes. She has two long and pointy ears behind her head and two relatively long and curved horns on her head. Two canine teeth protrudes from her closed mouth. Stormfly almost always wears a sly smile and laughing eyes on her face.

As a Mood-Dragon, Stormfly can change her body color according to her mood and emotion. Her usual color is that of a glittering gold coin, she turns a shade of violet color when she lies, and a pale green when she feels nervous or fear, she turns completely white when unconscious and red when received a compliment. she is also said to turn orange-pink when excited and blue-black when angered, as per the description of Mood-Dragons in the Dragon Profile in A Hero's Guide to Deadly Dragons. 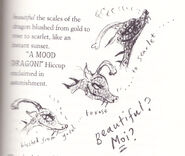 Stormfly upon hearing the compliment that she is beautiful.

Toothless fell in love with Stormfly the first time he sees her.

Stormfly and Toothless playing round the crow's nest of The American Dream 2.

A free icon on the Hiccup The Viking website.