View source
watch 01:22
What is Stormcutter?
Do you like this video?
Play Sound 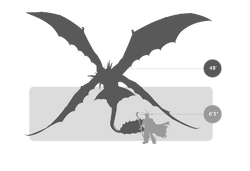 The Stormcutter is a large Sharp Class dragon that first appeared in How to Train Your Dragon 2.

Initial concept art depicted the Stormcutter with only two wings with very long claws and a head similar to a Skrill, except for the missing crown of spikes. It had a huge crest on its back, with thick spikes going down to its tail. It was red in color, with dark blue stripes on its back.

Other pieces of concept art show the development of the dragon's head, some of which include a pair of thick horns, which either faced downwards or backwards, in a similar manner to a buffalo's horns.

The Stormcutter's egg is a large oval and has a prominent scale pattern. There is a ridge with larger scales that run down its middle.

Stormcutters are known for their large size, iridescent fish-like scales, and two pairs of wings. They have owlish mannerisms and a second set of wings under their main ones. Stormcutter dragons walk on this second set of wings and their hind legs. The wings can also come close together so they can appear to be one main pair. They have a very muscular and sturdy build. Their face has two long spines that branch off their brow to the side and they have a flattened, owlish face, making them seemingly brachycephalic. They have a three-finned tail, many spines down their back, and a large crown of spikes on their head that makes them look even more menacing.

Titan Wing Stormcutters look very similar to their Broad Wing counterparts, apart from differences in color and size. They have brown, leather-like scales. Their wings are red near the body, at the base, and gradually lightens into pale pink towards the edge. They have a larger crown and tail fin, and the spines along their back are bright red and larger.

Their 'X-wing' beats up and down in sync and are probably used for extremely tight turns and maneuvers and for fighting foes. This body structure allows them to demonstrate accurate flight techniques such as navigating through narrow and complicated spaces, or hovering and even rest in mid-air. Having four wings allows for exceptional maneuverability. When they even walk they use their lower wings as forelegs while holding their upper wings against their sides. As demonstrated by Eir's Stormcutter, Stormcutters are capable of flying vertically to attack.

They have the unique ability to rotate their heads about 180 degrees, like an owl. By doing so, they can see in all directions easily.

Stormcutters can shoot a sustained blast of fire that is tornado-shaped, similar to the Typhoomerang. The fire is incredibly powerful, as Cloudjumper was able to ignite the entire Haddock House in seconds.

Similar to a Monstrous Nightmare, Stormcutters also have flammable saliva. It was shown in a deleted scene that the saliva of dragons other than the Monstrous Nightmare can be for the Inferno. Though, in that scene, the Stormcutter's saliva produces an intense flame that was difficult to control.

They are also strong enough to support humans on not just their back, but on their tail. A greater extent of their strength was shown in a deleted scene when Cloudjumper was able to rip apart one of Drago's war machines.

The Guide to the Dragons, Volume 1 gives additional stats for the Stormcutter not seen with other species: Strength is rated at a '6', while Endurance is rated as '9'. Stormcutters have hooked fore-talons on their wings that can be used to pick dragon trap locks or destroy an entire war machine. Their sharp talons are helpful to climb on mountains even upside down, as shown by Cloudjumper, much like bats.

Stormcutters can quickly understand the difference between people who are threats and those who are not, as Cloudjumper knew that baby Hiccup and Valka were harmless, but Stoick was the complete opposite.

Stormcutters have a great amount of stamina, as they are able to travel great distances without showing any signs of exhaustion.

Due to their hard scales, Stormcutters are able to take many powerful hits without being damaged too much. They can easily get up quickly after crash-landing. Some Stormcutter individuals, such as Reignstorm and Glitter Bomber, are even able to leisurely fly during thunderstorms with no sign of struggle. Cloudjumper has been shown to have extreme endurance as he was able to fly all the way back from Grimmel's base to New Berk despite having been attacked by two Deathgrippers.

Stormcutters have well-developed senses that are as good as those of Tracker Class dragons. An example of this is when Cloudjumper was the only dragon (that doesn't belong to the Tracker Class) that sensed the presence of the sleeping Foreverwings on Nepenthe. In Titans Uprising, Stormcutters like Woodland Stormcutters are said to have the "ability to detect subtle scents and shifts in the atmosphere" which "allows them to sense the intent of approaching Vikings and dragons".

As demonstrated by Eir's Stormcutter, Stormcutters are to create a deafening scream that can shatter ice-pillars. Because no other Stormcutters in the franchise are shown to demonstrate this ability, it may be Titan Wing exclusive.

Just like Night Furies, a Stormcutter is incapable of flight if one of the tail fins is damaged, as seen when Cloudjumper couldn't fly straight and struggled to stay in the air after his tail fins were temporarily frozen by Drago's Bewilderbeast.

Stormcutters, much like the Night Fury and Speed Stinger can hang themselves upside-down from higher ground, like a bat. Their resting position gives them a slightly peculiar and mysterious atmosphere.

They are intelligent, proud, and confident but can also be sweet and friendly. They can be aggressive and are also quite curious.

They seem to keep to themselves most of the time, preferring not interact with other dragon species.

Although they are mostly diurnal, some Stormcutter individuals, such as Dimflight, are active during the evening and night.

Generally, a docile and gentle dragon, training a Stormcutter is easy. All it takes is mutual trust, respect, and a love for dragons, which is shown when Valka meets Cloudjumper. The Stormcutter will be more than willing to accept you after that, making the training process pretty easy.

The first Stormcutter introduced was Cloudjumper; Valka's dragon. After her attack on Eret, Son of Eret and his men, and rescuing the dragons that had captured, Cloudjumper and Valka then found a Night Fury being ridden by a young man. Cloudjumper was able to overtake them, causing them to crash with the help of one of Valka's other dragons. They then brought the two to the Bewilderbeast's nest where Valka explained that Cloudjumper had actually met her during a dragon raid back on Berk. According to her story, Cloudjumper broke into Valka and Stoick's house and went toward the cradle that held Hiccup; Valka and Stoick's baby son. Valka first thought Cloudjumper's intent was to harm the baby, but instead, Cloudjumper was trying to soothe Hiccup by rocking him. Stoick, also believing that Cloudjumper wanted to harm Hiccup and Valka, attacked Cloudjumper. However, the burning house was coming down and Valka was blocked from her husband and child. Cloudjumper saved her from the fire but took her with him, leaving her husband and child wifeless and motherless. For the next 20 years, Cloudjumper allowed Valka to ride him, and together, they helped save thousands of dragons from Drago Bludvist's trappers such as Eret and brought them to safety at the Bewilderbeast's nest.

Cloudjumper appears in this game as part of one of the rider/dragon pairs the player can choose to play as.

The Stormcutter was released in Dragons: Rise of Berk promptly after the release of the second film.

The Stormcutter also became available in School of Dragons, along with a Viking costume inspired by its design.

Eir Stormheart managed to capture a Titan Wing Stormcutter, prior to the events of this game. She poisoned it with a concoction made of Grimora venom and dragonvine and placed it in the caves of Valka's Mountain.

Scribbler encountered it and freed the dragon. The Stormcutter could later help Scribbler in fight, if he chose to call it.