How to Train Your Dragon Wiki
Register
Don't have an account?
Sign In
Advertisement
in: Objects, Book Objects, Weapons,
and 2 more

The Stormblade was the best sword of Grimbeard the Ghastly and is used in the books by Alvin the Treacherous.

The Stormblade originally belonged to Grimbeard the Ghastly, Legendary Pirate, and King of the Wilderwest. Grimbeard buried the sword alongside a small fraction of his treasure in Skullion Island, leaving just a map in his coffin that hinted to its location. Also, the map stated his 'true heir' would be the one to find his hidden treasure.

Because Fireworm found the sword, it was believed by the Hairy Hooligans that Snotface Snotlout had fulfilled the prophecy and he was the true heir of Grimbeard the Ghastly. However, that was just a decoy and the real treasure was found by Hiccup Horrendous Haddock III.

Later, Hiccup finds Grimbeard's true will in the pommel of his sword, Endeavour, which reveals that Endeavour was Grimbeard's favorite, as "the Stormblade always lunged a little to the left."

Alvin keeps the Stormblade with him at all times and has crafted an attachment that allows him to fix the sword to the stump of his missing hand.

The Stormblade is a large, sharp, shiny broad sword. The hilt and the scabbard are all very ornately decorated and very rich-looking. 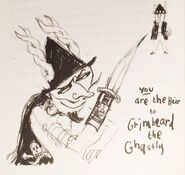