How to Train Your Dragon Wiki
Register
Don't have an account?
Sign In
Advertisement
in: Dragons, Dragon Species from the Books, Bog Dragon Class,
and 9 more

A smell so disgusting it makes you fall over... 6

Pretty good, I think, no one gets near enough to check... 3

Nobody is TERRIFIED of Stink dragons, because they can't actually KILL you, but people tend to leave them alone... 4

In the How to Train Your Dragon novella The Day of the Dreader, the Dreader sea dragon turned out to be a colossal type of Stink Dragon, though clearly not the same as the Stink Dragon mentioned here. Perhaps they are related.

The Stink Dragon is a small beautiful, bright orange dragon with big black stripes. This coloration is a warning that says to potential predators 'I am here and I am extremely formidable' or 'remember what I look like because you never want to mess with me.'

It is possible Stink Dragons also come in a white and black variety, as mentioned in How to Break a Dragon's Heart.

Anyone who encounters this small dragon would be wise to avoid it. Its greatest weapon is a stench so loathsome that makes anyone who smells it keel over in a faint or feel really nauseous. If it is disturbed or if it feels threatened it will open its mouth and spray a mist/liquid with pin-point accuracy that drenches its victim. This leaves the victim smelling bad enough for nobody to come near them for a week, and for 48 hours the smell is so awful and loathsome it is almost impossible to come near him. Stink Dragons are not very big, or strong, or all that fast, but that is because they do not need to be. Their stench is unpleasant enough to ensure that most animal (including humans) with a sense of smell will not approach them if they know about the defense. Animals and humans only mess with a Stink Dragon once. They don't do it again if they know what is good for them. Nobody fears death at the claws of this dragon, but everyone fears this animal's stink defense. They see them coming and they run for cover.

In keeping with their stinky defenses, Stink Dragons lay and incubate their eggs in fresh steaming dragon poo. This dragon typically lives in bogs and swamps like other bog dragons. Young Stink Dragons sometimes feel sad since no one wants to be friends with them.

These dragons might be trainable, but due to their smell, Stink Dragons are not trained.

A Stink Dragon's stinky goo can be carefully extracted from a hibernating individual. Hiccup does so in How to Seize a Dragon's Jewel for use as part of a disguise.

Though Stink Dragons do not figure directly into the story, they do appear on an informational page in this book.

As Hiccup and his Windwalker search for Fishlegs in the forests of Berserk, they see some wild Stink Dragons.

In order to disguise himself and sneak into the prison at the Amber Slavelands, Hiccup extracts some 'stink' from the glands of a hibernating Stink Dragon.

The Stink Dragon is mentioned in this Reference Book and also appears in the 'Dragon Key' at the back of the book. 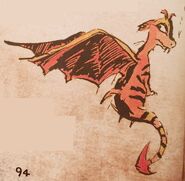 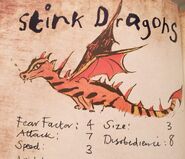