How to Train Your Dragon Wiki
Register
Don't have an account?
Sign In
Advertisement
in: Dragons, Dragon Species from the Books, A Hero's Guide to Deadly Dragons,
and 7 more

Unparalleled. Can't be detected by their victims until it is too late... 10

Stealth Dragons first appear in the Book series in A Hero's Guide to Deadly Dragons.

Stealth Dragons are just that - stealthy. Their colors are constantly matching their environment, making them effectively invisible. It is not clear whether the Stealth Dragon changes color at will, or if the change is unconscious. There is no image of one, though the books imply it is a large dragon that can seat more than one person, and has one pair of wings.

In addition to color-changing, Stealth Dragons are made stealthy not just visually, but also through sound. These dragons can slow their heartbeats that another dragon might hear, as well as flap their wing silently while flying.

Stealth Dragons are used by Vikings as riding dragons, in particular for military stealth or reconnaissance operations. Though the dragon is invisible, its riders aren't. This is circumvented by seating riders between the double row of large aerodynamic spikes along their backs, thus masking the riders as well.

A Stealth Dragon is stolen by Big-Boobied Bertha from Madguts the Murderous. In turn, Camicazi stole the Stealth Dragon from her mother, and she and Hiccup flew it to the Meathead Public Library. Their mission was to get another copy of How to Train Your Dragon by Professor Yobbish because the original copy was ruined by Toothless.

Stealth Dragons are mentioned in the 'Dragon Key' at the back of this reference book.

A Stealth Dragon is seen again during the fight between humans and dragons, when Excellinor the Witch tries to sneak up on Hiccup. 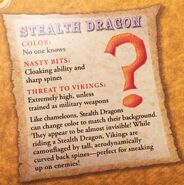