How to Train Your Dragon Wiki
Register
Don't have an account?
Sign In
Advertisement
in: Animals, Dragons: Riders of Berk, Dragons: Race to the Edge, Dragons: Rise of Berk

Squids are sea animals mentioned in various media of the DreamWorks Dragons Franchise.

Squid are invertebrates belonging to the Order Mollusca, despite not having a visible exterior shell like other mollusks. Instead, the tissue from which shells originate is internalized, forming a hard structure called the Gladius. This also holds true for other members of the Class Cephalopoda, such as Octopi. Also like Octopii, squid have a distinct "head" and eight distinct tentacles. Often one pair of tentacles are much larger than the rest. Squid also have a body area called the mantle.

"Ink" is another defense mechanism of squid and other cephalopods. Squid have two ink sacs near their rectum that arises from tissue of the digestive system. Squid in is blue-black in color (as opposed to Octopii which have pure black ink) and is comprised almost entirely of melanin.

Squids are wrestled by Vikings for ink in the DreamWorks Dragons Franchise, as heard in the TV episode "Dragon Flower when Trader Johann said that he wrested a giant squid himself to get squid ink for Hiccup. Other than this, squid is not specifically mentioned, though it might be inferred that they are eaten as well, and seems reasonable that dragons - at least Tidal Class dragons - eat squid, too.

In reality, squid are primarily used as a food source in a variety of cultures. Squid ink is also used to eat and as food coloring. Historically, squid ink has been used to write with, but not in modern times.

In the episode, "Dragon Flower", Trader Johann arrives at Berk with item to trade and items requested by the Hairy Hooligan Tribe. Hiccup had requested ink to write with.

At the end of the episode, "Frozen", Trader Johann gives Hiccup a bottle of squid ink as a thank you for rescuing him.

Squid ink mentioned as a metaphor for Ruffnut's eyes by Throk, as part of a poem in honor of her, in the episode, "Snuffnut". Squid are not actually seen in the Franchise.

In "In Plain Sight", Johann arrived on Dragon's Edge in order to give Heather a bottle of squid ink, in order to make up for the ambush on her at the Northern Markets.

In this game, players can collect assorted items to complete "Collections". One such item is a bottle of ink, in a nod to the squid ink appearing in the TV series. A bottle of ink is available for the player to purchase from Trader Johann's Ship. 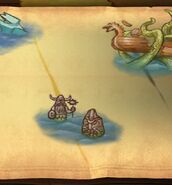 In "In Plain Sight" 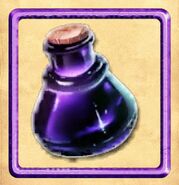