How to Train Your Dragon Wiki
Register
Don't have an account?
Sign In
Advertisement
in: Plants, School of Dragons, Human Food,
and 2 more

Squash is a vegetable first seen in the game, School of Dragons.

The term squash refers to any plants in the Genus Cucurbita, which also include plants called pumpkins and gourds. In the Franchise, the squash that appears is a yellow summer squash variety of Cucurbita pepo. This species also include zucchini, pumpkins, and patty pan squash. Other types of squash may belong to other Cucurbita species.

Cucurbita pepo has been cultivated for thousands of years in Mexico by native peoples. Not until the 1600's was squash introduced to Europe and elsewhere. Vikings would not have had squash in the Viking Age.

Most squash varieties have vine-like stems and a trailing habit. They have wide lobed leaves and usually have large yellow flowers.

The primary usage of squash is to eat. The seeds and flowers are also edible. Some native peoples used squash in herbal medicine and in some ceremonies.

In one Farm Job in School of Dragons, Valka wants squash, Arctic Willow, and dragon nip to spread as a concoction on her clothes that soothes nervous dragons.

Squash are a crop that the player can grow on their farms, then use to complete Farm Jobs for rewards. A bag of squash seeds cost 72 coins and yields 9 squash in 35 minutes.

A squash patch, named Squash Square, is a seasonal decoration that was introduced in the game with the 1.50 update. It costs 50 Loose Leaves and requires 20 minutes to be built.

A Butternut squash is seen in the background of 'Thanksgiving' Meatlug, along with Apples, pumpkins, and berries. 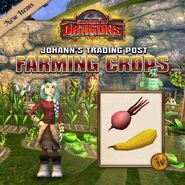 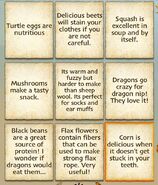 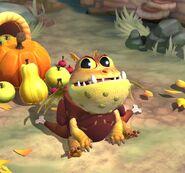